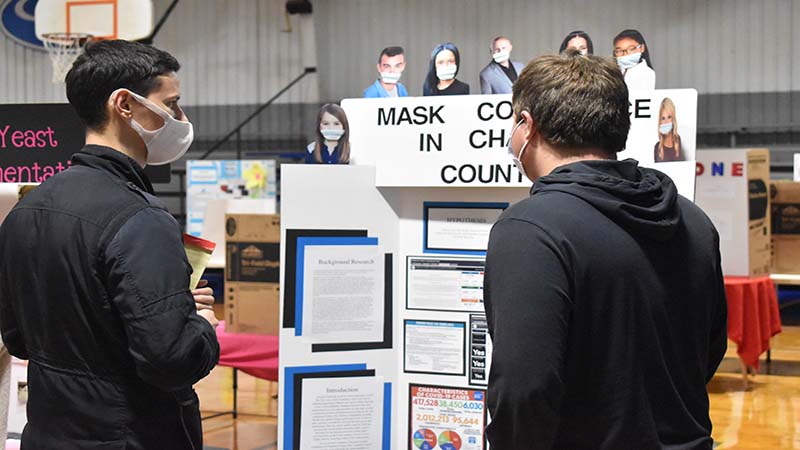 Due to COVID-19, the Alabama Independent School Association canceled most of its academic competitions for the school year, including its annual science fair. Though there was not going to be a district and state competition, Chambers Academy decided to continue its annual competition.

“I understand we’re in a pandemic, and it’s extremely challenging. It’s been very difficult on everyone, however, we’re working really hard to provide experiences for our kids so they don’t miss out on those opportunities,” Headmaster David Owen said. “It’s been a challenge. The AISA pretty much did away with most of our academic competitions this year state-wide because of the opportunity to spread COVID-19. In spite of that, we want to continue to have a science fair that has happened here every year or the past several years. It’s a right of passage for our kids.”

“I think it’s very important. It gets our kids more involved and actually working the scientific method, instead of just being able to tell you what it is in their own words,” Chambers Academy science teacher Brandi Fuller said.

Students are able to choose their own projects. Fuller said she usually tries to encourage her younger students to choose a project that follows along with the class’s curriculum. For example, eighth-graders at Chambers Academy learn Earth Science, so Fuller prefers students have a physical science project rather than a biological. Seniors are encouraged to choose a project based on what they want their career to be.

“It’s always fun to see what younger people come up with,” Fisher said. “There’s always some really interesting stuff here that I hadn’t really thought about. They’re very creative with what they’re doing.”

Fisher, Shmatok and Talbiezhad had all judged the Chambers Academy science fair in previous years, while this was Harvill’s first year as a judge. “We always love to come out here,” Fisher said. “It’s really fun to come out here and take a break from the labs.”

One of the projects that caught Harvill’s eye was an M&M melting project.

“I had one find out that different colored M&Ms melted differently,” Harvill said. “That was very strange to me, like why would different color M&Ms melt different? So, that one definitely caught my attention. I would never have thought to go ‘do different colors make a difference on melting M&Ms.”