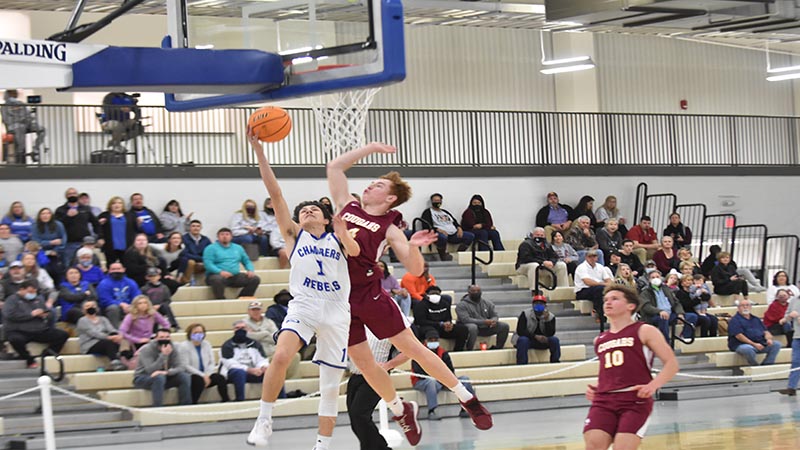 Even when it has struggled to score at times this season, the Chambers Academy boys basketball team has been able to get stops on defense, which will allow it to get into the rhythm of the game. On Saturday, the Rebels couldn’t find any consistency on offense and struggled to consistently get stops, leading to a 59-52 loss to Escambia in the Class AA state quarterfinals.

“I thought we had a really good team, but you have to tip your hat to Escambia. They played better than us [Saturday],” head coach Jason Allen said. “I think if we play them 10 times, we probably beat them nine, but they beat us today. That’s the way it goes in sports, and that’s the way it goes in life. Sometimes it’s your day, and sometimes it’s not. I’m proud of our kids, we had a heck of a season.”

Escambia started the game hot. The Cougars were knocking down wide-open jump shots and when a shot would carom off the rim, a Cougar would oftentimes be there for a second or even third shot opportunity. They scored 10 of the first 11 points in the game.

Offensively for Chambers, the Rebels struggled to knock down shots against the Cougars box-and-one defense (four players play a zone while one player plays man-to-man defense).

“They came out highly-motivated and they hit some shots,” Allen said. “I didn’t feel like we were going to lose the game in the first quarter. The problem was we just had trouble scoring until the second half, then it was probably too little, too late. I thought we didn’t keep them off the offensive boards well enough. They got some second-chance points, and of course, we missed a ton from the charity stripe. That’s been our Achilles heel all year.”

Chambers was outscored 15-9 to start the game, hitting just three shots from the floor and making half of its free-throw attempts.

Escambia continued to make the game tough on the Rebels, as they knocked down two more 3-point shots and knocked down all of its free throws. Chambers on the other hand made just four of its 10 attempts. The only saving grace for the Rebels in the quarter was senior Josh Holliday, who scored six of the 12 points in the quarter.

The consistent problem for Chambers in the first half was Escambia would knock down shots early in the quarter, building a double-digit lead that Chambers would chip away at the remaining minutes.

The Rebels really didn’t get their offense going until the fourth quarter. They started the quarter down 12, but they were able to chip the lead down to 5.

The game changed with about four and a half left, as senior Payton Allen fouled out. Allen was the team’s leading scorer and was the focus of the Escambia defense. After he fouled out, Jason Allen turned to one of his other seniors, Holliday.

At this point in the game, Holliday had played well. He had 11 points in the game, which led the team, but he was the offensive catalyst for the Rebels to end the game, scoring 10 of Chambers’ final 13 points.

“Josh is a great shooter. He hit a couple in the first half,” Allen said. “I was calling plays for him to get more shots, but we didn’t execute and get it to him like we needed to. If he hits two, we’re going to let him shoot three. If he hits three, we’ll let him shoot four. He kept battling and fighting. He was exhausted at the end of the game.’

Though Holliday provided a spark, the 12-point deficit was too large to overcome.