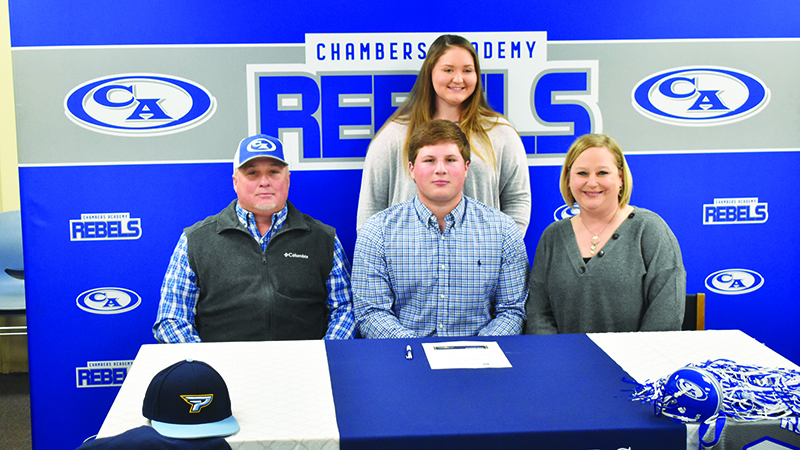 Chambers Academy lineman Jacob Oliver finished off his high school football career with a state championship. On Monday, he added another milestone to his career, as he signed to play football at Point University.

“It just felt like a family,” Oliver said. “It’s close to home, which is what I was looking for.”

Oliver was one of the few players that played both ways for the Rebels in 2021, playing both left guard and defensive end.

As a defensive end, Oliver finished as a second-team All-State selection, totaling 121 tackles and 18 tackles for a loss.

In his career as a guard, he finished with 85 pancake blocks.

“He’s been a joy to coach. Just watching him grow from a fifth-grade young man into what he is now has been really fun for me,” head coach Jason Allen said. “He was a huge part of our program the last couple of years and a huge part of us winning the state championship. The way he ended his career is just perfect. I’m really excited for him.”

The fact that Point is the local team, and he can be close to his family was a big factor in Oliver’s decision.

“It was pretty big that I can live at home and just drive back and forth,” Oliver said.

Oliver was one of two starting linemen to return to Chambers Academy this past season. He, along with senior guard Dean Sheffield, were a dominant pair in the Rebels running attack.

“I never had to worry about them,” Allen said. “They knew what to do and where to be. They led the other players and helped them with their assignments. They were like coaches on the field, and that’s tough to replace. We’re going to miss [Oliver], but we’re excited for him that he gets to play close to home where his people can see him. He’s just been a joy. We’re celebrating for the time that he’s been here.”

Oliver is the first player from Chambers Academy to sign this year, but he is the third member of the 2019 team’s offensive line to sign a scholarship to play football. Jake Waldrop and Gabe Brooks both signed with Faulkner last school year.

“I’m a big believer in you win and lose ball games with those guys up front. They did a lot of great things for us all year and in that championship game,” Allen said. “You’re not going to replace players like that, you just try to get some of the production back. We’re going to be starting over at the guard spot, but that’s part of it. We’ve prepared Jacob to play at the next level, and I think he’s ready.”

Oliver will have a chance to play against Brooks and Waldrop next season as Faulkner and Point are in the same conference.

Oliver is the third player from Chambers County to sign with Point, joining LaFayette’s Julius Bullard and Beulah’s Austin Billingsley. All three players are linemen.