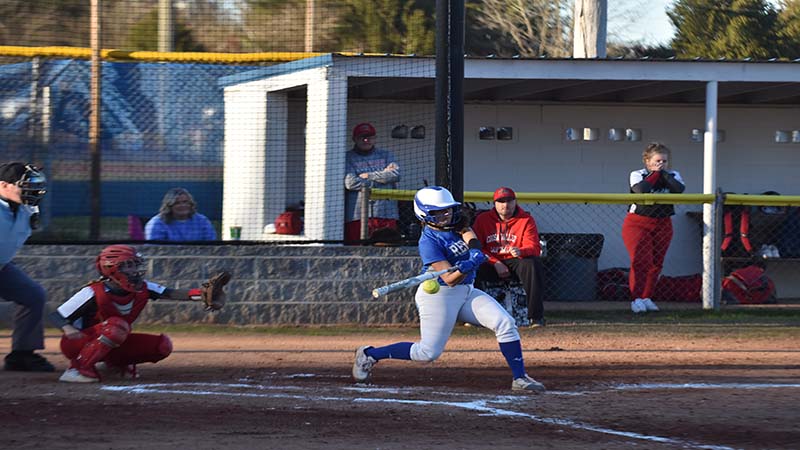 A big third inning propelled the Chambers Academy softball team to a 10-2 win against Coosa Valley on Monday for its third win of the season.

“We had a big third inning. We got a couple of hits then we got a bunt down, and that created a little bit of confusion for them,” head coach Jon Owen said. “It was basically just a matter of getting some timely hits with less than two outs and being able to move runners around through the short game. Overall, we’re starting to hit a little bit better. We have a big tournament this weekend at Morgan, so we’ve got to start to fine-tune some things before we go over there. Bunting is one of those things.”

In the first two innings, Chambers had runners reach but couldn’t move them around the bases. Trailing by a run in the third inning, the Rebels got a base runner on first with one out off an error by the Coosa pitcher. A steal and another error brought in the Rebel’s first run of the inning. A couple more errors caused some havoc for Coosa Valley, scoring a run for Chambers.

Now up 2-1 and the middle of its lineup at the plate, the Rebels put their foot down, scoring two runs off a Megan Ware double to left-center field.

Chambers batted around in the inning, scoring seven runs in total.

Chloe Mitcham finished with the win, throwing a complete game. She was effective for the duration of the game, pitching to contact while also sitting down several Coosa hitters down throughout the course of the game.

“I thought she was dominant on the mound,” Owen said. “I thought she did a really good job of mixing her fastball and changeup and locating spots. That’s what we’ve talked about the last week or so. She’s just as good of a changeup as she does a fastball. When she throws it and has confidence in it, it is a deadly pitch for her.”

While his team’s offense put up 10 runs in six innings, Owen is focused on improving the team’s defense, especially early in the year

“Defensively, we have to get a little bit better, but overall, I thought the performance was really good out there,” Owen said. “It’s just about getting the routine out. We have kids that did that. I thought Bailey [Allen] played really well out there, so she’s been a big defensive key for us.”

Senior Megan Ware finished with three RBIs in the game to lead the team.

In its first three games this season, the Rebels have outscored their opponents 39-6. While the offense has been clicking early this season, Owen is focused on the team’s defensive improvement moving forward.

“I tell our kids all the time, don’t let it fool you, but you’re only as good as the next game you play,” Owen said. “Fortunately, we did some things really well offensively. Right now, probably my greatest concern is getting our defense sharper. We’re trying some people at different spots early in the seaosn. Our defensive skills, we have to improve those… Yeah, the scoring as many as we’ve scored has been great, but I’m interested to see how much we improve on the defensive side.”

Chambers will play in the Morgan Academy Tournament starting on Feb. 25.