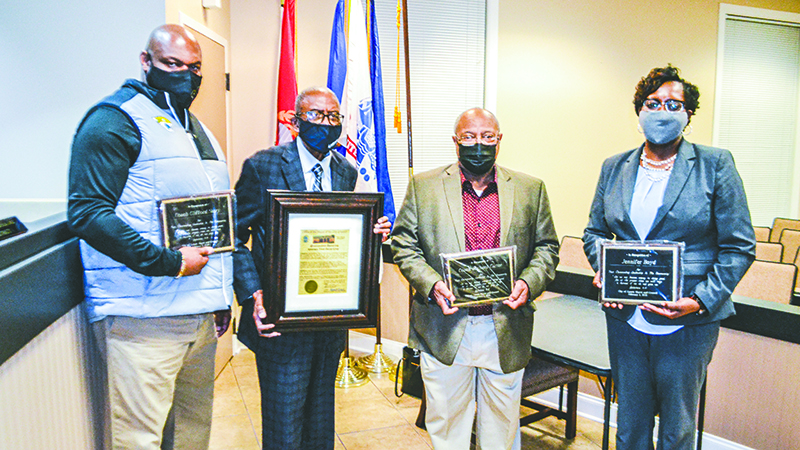 On Monday, three educators were recognized for their contributions to the local area. They are at left, LHS head football coach Clifford Story; third from left, former head basketball coach Richard Carter and far right, Superintendent of Lanett City Schools Jennifer Boyd. Second from left is famed Civil Rights attorney Fred Gray, who received a mayor’s proclamation recognizing his work in advancing equality, social justice and opportunity for all. In the late 1940s, Gray was a young minister who preached at the newly organized Lanett Church of Christ. --Wayne Clark

After accepting a large framed copy of a mayor’s proclamation recognizing Feb. 1 as “Fred Gray Day” in Lanett, Gray talked about a connection to Lanett that goes back more than 70 years. He explained that when he was a student at Alabama State in the 1940s he was active with the Church of Christ and had been called to preach. At the time, a man named John Henry Clay was organizing a Church of Christ in Lanett’s Jackson Heights neighborhood.

“It started with tent meetings,” Gray said. “He baptized a lot of people and started a church. I was in Montgomery at the time and asked me if I could preach at the new church. I told him I would.”

That meant taking bus rides to Lanett to preach to members of a new and growing church.

That church now has services in the former Skinner Corporation building off North Lanier Avenue. There’s much more parking outside and much more room inside at this location.

“I’m glad to see the church has grown over the years,” Gray said.

Gray has been married to the former Bernice Hill since 1955. They have four children, among them enough lawyers to start a law firm. In the early 1950s, there was no law school in Alabama that would allow black students to enter. To earn a law degree, Gray had to move out of state. He earned his Juris doctorate at Case Western Reserve University in Cleveland, Ohio in 1954, the same year the U.S. Supreme Court handed down the landmark Brown v. Board of Education decision, declaring that segregated schools were “inherently unequal.”

Two of Gray’s sons, Fred Jr, and Stanley, are lawyers as is Fred Jr’s. wife.

One of Bernice’s sisters once taught at Lanier High in Lanett in th 1950s.

”I am very glad to have had that connection,” he said.

The current board chair of the Lanett City Board of Education, Gwen Harris-Brooks, is a long time family friend.

Gray is nationally famous having represented people like Rosa Parks, Dr. Martin Luther King Jr., the plaintiffs in the notorious Tuskegee Syphilis Study (1932-72) and numerous desegregation lawsuits such as Lee v. Macon. He accepted the Monday award on behalf of the thousands of lesser known people he’s represented over the years.

“You would never see their name in print or their photo in the newspaper or on TV,” he said. “Everyone knows of Rosa Parks and she deserves that recognition, but what about the 15-year-old girl (Claudette Colvin) who did the same thing she did nine months before she did? I accept this award on behalf of those who were denied a decent education or fairness in the justice system. When I started my career as a lawyer, African Americans couldn’t serve on juries in Alabama.”

Gray represented both Colvin and Parks in court. He also represented Vivian Malone and James Hood, both of whom had been denied admission to the University of Alabama. They were later admitted despite Gov. George Wallace “standing in the schoolhouse door” to deny them from entering. Gray also led the successful effort to integrate Auburn University. He filed the Lee v. Macon case in 1963. Four years later, a three-judge panel of U.S. District judges ordered all Alabama public schools not already subject to court orders to desegregate.

Quite a few years have passed since those court orders were handed down. Gray is concerned that people could forget the lessons of history.

Gray said he wants everyone to know that regardless of how bad our problems are today, they were worse in the past.

One of the exhibits in the new museum makes that point. It lists 623 names of people who were victimized in the Tuskegee Syphilis Study. “

Under a chandelier that used to be in a bank you can now hear a recording of an apology made by the president of the United States on this having taken place,” Gray said.

“Mr. Mayor and members of the council, I am happy to join these three other recipients in getting an award tonight,” Gray said.

“They are local ones who make it possible for others to be honored in the coming years.”

“He is a civil rights attorney, preacher and activist who has devoted his life to advancing equality, social justice and opportunity for all,” the proclamation reads. “Mr. Gray litigated several major civil rights cases in Alabama, including some that reached the United States Supreme Court for rulings. He has published an autobiography entitled ‘Bus Ride to Justice: The Life and Works of Fred Gray.’ He is also a member of Omega Psi Phi and Sigma Pi Phi.”

In introducing Mr. Gray for the awards presentation, Mayor Kyle McCoy said that the desegregation of public schools had affected his life in a positive way. He said that the Lanett City School System had fully integrated in 1970, the year he entered the first grade. Integration allowed him to attend classes with African-American students and to have teachers like James and Oreatha Hardy, Essie Mae Harris, Alfredkate Franklin and others.

He said there’s quite a contrast to signs seen today that ask people to wear masks and those signs once seen that said “white only.”  Today’s mask signs ask people to participate in a much-needed public health policy.

“Even so, some people say it’s an infringement on their rights,” McCoy said. “How can you compare that with the white only signs? Black troops like the Tuskegee Airmen helped us win World War II. They had fought for someone else’s freedom. What did they think when they returned home and saw the White Only signs? I have no doubt the Civil Rights movement of the 1960s started with veterans like the Tuskegee Airmen returning home. I want you to think of this when you see the ‘wear masks’ signs. We are proud to have with us tonight a man who helped lead the fight to take down those white only signs.”