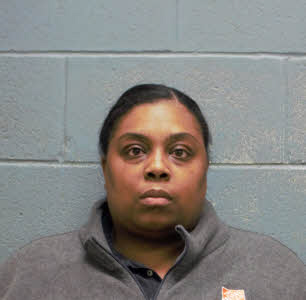 On Jan. 26, 2021, the Lee County Sheriff’s Office received a request from an insurance company regarding an Incident/Offense report they received pertaining to a Burglary and Theft of Property. The insurance provider was seeking verification of authenticity on the report they received from the victim/claimant requesting payment for the loss. Investigators determined the report was a falsified document and believed it to be an attempt at insurance fraud. The fraudulent report was showing that a burglary occurred at a residence in the 1100 block of Lee Rd. 270 in the Cusseta community of Lee County where approximately $5,191.00 worth of items were stolen.

Investigators made contact with Nekida Janquetta Finley (35) from Cusseta at the residence in question. Ms. Finley admitted to fraudulently creating the document in question and several other documents of similar nature and sending them to other insurance companies. Additional suspected fraudulent documents were found in her possession.

Ms. Finley was arrested and charged with 2 counts of Forgery in the 2nd Degree. She was later released on a $6,000.00 bond. The investigation is still ongoing and more charges are anticipated.