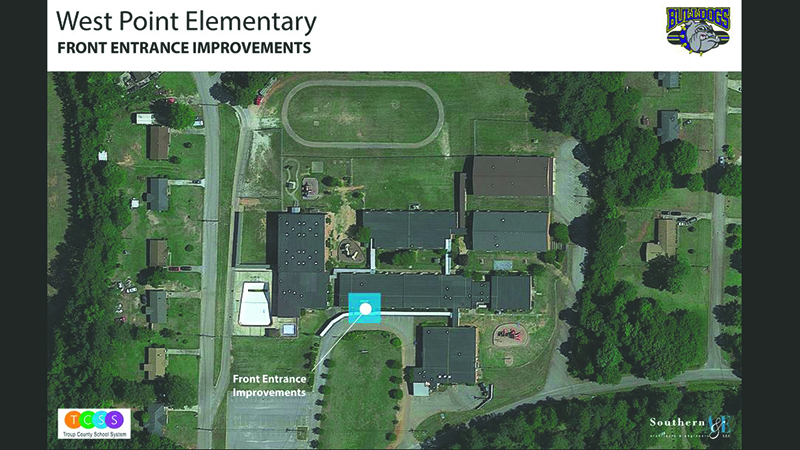 Later this month, early voting will start on the proposed E-SPLOST VI, and the Troup County School System has released a list of projects it hopes to complete if voters approve the continuation of the one-cent sales tax.

E-SPLOST stands for Education Special Purpose Local Option Sales Tax and if approved would be the continuation of a one-cent sales tax on all retail purchases in Troup County. In the past, E-SPLOST has been used to fund major projects for TCSS, including athletic facilities at LaGrange High School and Troup High School and the construction of Clearview Elementary School. It’s also been used for technology upgrades, such as purchasing 9,000 Chromebooks, and security upgrades. E-SPLOST cannot legally be used to pay for salary costs.

TCSS is projecting that it will collect $72,159,375 in E-SPLOST VI, plus projects to receive roughly $8 million in capital outlay funding, which is allocated by the state for use in specific projects that meet the state’s criteria. TCSS has released $81,802,982 worth of proposed projects for ESPLOST VI.

TCSS is currently in the process of acquiring land across Rosemont School Road for a new Rosemont Elementary School. The school is the expected to be most expensive project on the list of E-SPLOST projects, with Assistant Superintendent Chip Medders projecting the cost at around $20 million.

Medders said there are a lot of unknowns about the project, but TCSS is hoping to officially acquire the land in the next few weeks. Somewhere between 800 and 1,000 students would attend the school, and Medders said natural growth in that area is a big reason why. In January, Rosemont’s current enrollment was listed at 568, according to enrollment numbers shared at the TCSS work session.

The new school is projected to be much larger than the current Rosemont Elementary School. Medders said TCSS won’t know specifics until an architect reviews the site and puts a plan together, but he envisions a building close to the same size as the new Clearview Elementary School, which is around 90,000 square feet.

Medders said it’s a two-year project from start to finish, with a timetable of around August 2024, but anything could throw that off at this point.

“We want to build something that’s going to be consumed by everyone in the Rosemont area and the Troup County School System — a 21st century, up-to-date school with a lot of bells and whistles that the kids presently at Rosemont probably don’t see,” Medders said.

The current Rosemont Elementary School is on a well and septic tank. TCSS is in the midst of working with the city of LaGrange to get water run to the Rosemont site.

Along with the water issues, Medders said the current school has issues such as an “extremely small” lunchroom that has forced some students to start their lunch as late as 12:30.

Part of the new E-SPLOST projects include several renovations at Callaway High School.

One large one is a new performing arts center, which would likely seat between 450 and 500 students. The arts center would be built adjacent to the current fine arts program.

Troup High and LaGrange High already have performing arts facilities, though the LHS one will also be renovated if the E-SPLOST vote passes.

“I think it’s going to be a great addition to Callaway High School,” Medders said.

A lot of athletic projects will also be completed at CHS, including renovating the gym.

“The first thing is to take the existing gym they have and do a complete overhaul, renovation of that gym. New flooring, taking the lobby space and making it much bigger, sound system, locker rooms and really make that look like something that really catches your attention,” Medders said.

“We are planning it virtually exactly like Troup High School as far as the square footage,” Medders said.

The tennis courts will have to be relocated to make room for the new indoor practice field, so they will be moved slightly over.

There will be a new paving, parking and new soccer locker rooms, bathrooms and concessions installed as well. Currently, there is not a bathroom in place at the soccer facility.

Medders said TCSS is going to move the baseball dugouts up the line for safety, so that they aren’t in the danger zone of a foul ball. A brick knee-wall with a net backstop will be installed at both the baseball and softball fields.

With projects related to fine arts, football, baseball, softball, soccer and more, Medders said the CHS projects, such as the indoor practice field, will impact a large portion of the student body at the school.

“When we say indoor practice facility, you naturally think football because there’s football lines in it, that’s used by every sport throughout the school year and the summertime,” Medders said. “It is literally for every student athlete we have.”

Medders said the CHS projects will cost roughly $18 million overall. He said one good thing is that each CHS project is a singular project, meaning they can all be started and completed at varying times.

At Hogansville Elementary, 6 to 8 new classrooms will be added. At this point, TCSS has two different options for where the classrooms will be — one that would require rerouting the path to the auditorium and another that might impact the bus riders and food service deliveries.

Medders said the cost is expected to be around $2 million.

“[HES] has multiple mobile units that they have to use at the school right now,” Medders said. “The need is to eliminate the name of the mobile units so that every child has an indoor classroom. We have outgrown the school, and it’s been that way for several years.”

Medders said TCSS will facelift the front entrance at West Point Elementary at a cost of around $750,000.

“We want to re-image — when you drive up to West Point — what that front entrance looks like to make our kids and families proud of what they see when they enter that school,” Medders said.

Medders said the LaGrange High School auditorium will also be getting renovated. The facility is decades old and among many things needs upgraded bathroom facilities, Medders said. Right now, there’s only one bathroom for both men and women.

Medders said TCSS expects that project to cost about $1 million, with capital outlay funds being available for that project as well.

Other projects that are part of SPLOST VI include several capital outlay projects, where TCSS will receive some funding. They include HVAC replacements at Bertha Weathersbee Elementary, Gardner Newman Middle, Hogansville Elementary, LaGrange High and West Point Elementary.

There are also flooring projects at Berta Weathersbee, Hollis Hand Elementary and Long Cane Middle. Berta and Hollis Hand will also be getting lighting upgrades.

As part of SPLOST VI, Troup High School will also be getting re-roofed, Medders said.

Other upgrades include technology upgrades totaling $7.6 million, such as Chromebook replacements, teacher and administrator computers and more.

System-wide buses will be replaced at a projected cost of $5 million.

Security measures will be installed at a cost of about $2.3 million.

The last day to register to vote in the E-SPLOST vote is Feb. 16 and early voting begins Feb. 22. Election day is March 16.