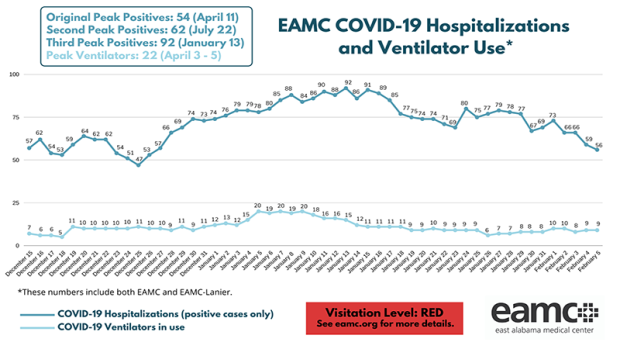 EAMC’s COVID-19 hospitalizations have decreased by 10 since Wednesday’s report and now sits at 56, the lowest since the day after Christmas. “It took 18 days to go from 47 patients on Christmas Day to 92 patients on January 13,” stated John Atkinson, EAMC spokesman. “The descent from the peak usually takes longer, and we are currently at 23 days since the peak with still a little more progress to make to back to 47.”

Atkinson says 47 is not a finish line, but rather a first step in getting back to a more manageable situation. “As long as we’re in this pandemic, the ultimate goal would be to have hospitalizations be less than 30. That allows us to have one dedicated unit for patients with COVID, and only a portion of our ICU beds in use for COVID needs. In other words, that allows us to both provide for patients with COVID as well as other patients without too much excess strain.”

The new Community Vaccine Clinic is allowing the number of vaccinations to grow more rapidly. With 946 doses of the Pfizer vaccine administered today, the total number of shots given this week was 3,893 and brings EAMC’s overall total since mid-December to 15,416.

“Of the vaccinations given this week, 2,564 were first doses to people age 65 and greater.  We’re excited that we were able to get that many through this first week while getting our feet under us at this new location,” said Atkinson. “We’ll plan to continue running strong each day, but vaccine availability will remain the key component. We appreciate the awesome support from student nurses, volunteers and working officials. This clinic would simply not be possible without them.”

Last Friday, Governor Kay Ivey’s office released a plan to expand vaccine eligibility to ages 65 – 74 as well as to several essential worker categories beginning Monday, February 8. “We had already planned to open to 65 and greater on Monday of this week, so we’re pleased that people in that subgroup got a jumpstart,” stated Atkinson.

The workers listed in Gov. Ivey’s plan are as follows:

Judiciary (including but not limited to) circuit judges, district judges and district attorneys

WASHINGTON, DC – U.S. Congressman Drew Ferguson (R-Ga.) released the following statement on H.Res.72:  “As I have said before, I do... read more