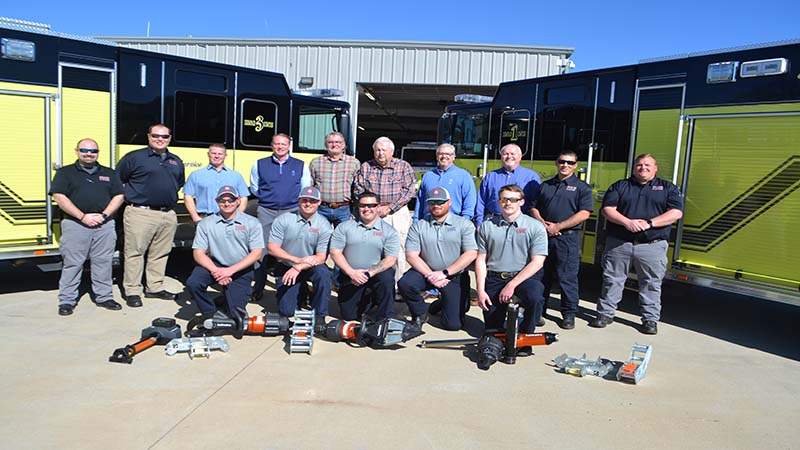 VALLEY — In a Tuesday afternoon ceremony at the East Alabama fire station in the Fairfax community, Valley Mayor Leonard Riley and representatives of the East Alabama Fire Department thanked officials from John Soules Foods for helping fund the purchase of state of the art lifesaving equipment.

The Holmatro Pentheon Series is the new generation jaws of life. Officials said the battery-powered equipment is easier to operate than its forerunner and is fast in extricating someone trapped inside a wrecked vehicle or a burning house.

“It’s much faster to use and is a lot stronger than what we have been using,” said East Alabama Fire Chief Kerry Pickard. “We are training everyone on it right now, and we will have it on our front-end ambulance. That’s the one that goes to all the wrecks, and we have a lot of them on the section of I-85 we cover.”

Over the years, the jaws of life proved to be a valuable piece of extrication equipment, but it does have its drawbacks. It’s hydraulic and sometimes is hard to operate. In some situations, there’s a cumbersome process of connecting up to three different rams to get the job done. The new device is a cordless telescoping ram that extends up to 70 inches without being connected to anything else. That’s important in situations when mere seconds matter in saving someone’s life.

“It’s a new tool that will open a door a lot faster than having a firefighter kicking it in,” he said. “You have to do that in an emergency situation. This tool will help prevent firefighter injuries and will open the door with less damage to the structure.”

“I want to thank John Soules Sr. and John Soules Jr. for this donation to the community,” Riley said. “We feel like they have been part of our community since coming here, and we welcome them with open arms. We look forward to continue working with them. Their new plant will be opening in Valley later on this summer.”

“We are excited to be here,” said John Soules Jr. “Hopefully, we will be here a long time and employ lots of people in our new plant. God has blessed our company. I pray for the protection of these firefighters and their families.”

Pickard describes the new equipment as a game changer.

“Seconds matter when someone is trapped inside a wrecked car or a burning house,” he said. “This equipment is easier to use than what we’ve been using, and it can help rescue people in a shorter amount of time. We have 15 firefighters at either this station or our main station on Fob James Drive. All of them are being trained in the use of this equipment. We’d like to think we’ll never have to use it, but past history teaches us that we will. When we do have to use it, we know it will help us a lot.”

Headquartered in The Netherlands, Holmatro introduced the Pentheon series in May 2020. They are designed to work at a much faster speed than conventional rescue equipment while being easier to handle. The East Alabama Fire Department covers the southeast corner of Chambers County from I-85 to the Lee County line. It’s an area of approximately 39 square miles with 13,000 residents.