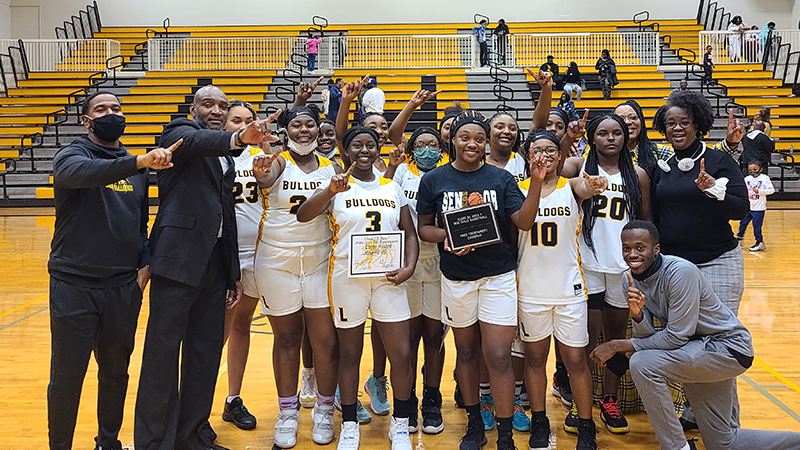 For nearly the entire game, LaFayette’s Ebony Williams was struggling to find space to shoot. Lanett was running a box and one [four players are playing a zone while the fifth defender is playing man-to-man on one particular player] on her.

With less than 5 seconds left on the clock, Williams darted to the far corner, caught the pass from Toniya Collier and fired a shot all in one motion.

The ball hit nothing but net with a second left to play. Lanett couldn’t answer with a shot of its own, giving LaFayette a 48-46 win in the 2A Area 7 championship game.

“I was like ‘I have to make it. If I miss, I’m going to be mad and the team is going to be mad, so I have to take my time and shoot this shot,’” Williams said. “I prayed to God for the shot to go in, and it went through.”

The shot was Williams’s second made field goal of the game. The only other time she got enough room to shoot was in the first quarter when she made a floater in the paint.

“I was unsure 40 percent but sure the 60 percent,” LaFayette head coach Fred Bridges said. “In practice, we practice game situations, and that’s how I felt comfortable with the shot but I was still unsure. That was a big shot. For a senior, the area championship game in a cross-town rivalry, you can’t ask any more for that. It’s a good finish.”

In the previous two matchups this season, the games have been close until the end and Friday’s game was the exact same, as the score was tied at 31 heading into the fourth quarter.

Lanett led most of the fourth quarter, building a three-possession lead a couple of minutes into the quarter. The game started to change when Lanett started to make unforced errors.

The Panthers struggled to close out the game because of turnovers, especially in the final four minutes of the game.

“I think what hurt us tonight at the end was our decision making,” Lanett head coach Charlie Williams said.

While Lanett was struggling to hold onto its possessions, LaFayette was chipping away at the deficit, by making free throws, as the Bulldogs hit seven in the quarter.

The area championship is the second in a row for the Bulldogs, advancing the culture that Bridges is trying to build in his second season.

“This is huge for our program,” Bridges said. “When I came in last year, and I said this to the players and the parents, that we’re here to build a program, not a basketball team. When we build a program that involves everybody from the parents from the players to my coaching staff. When we do that, we build a community. We respect each other. We enjoy what we’re doing. Going back-to-back like this, it is exciting. We’re looking for big things.”

LaFayette will host Vincent while Lanett will travel to B.B. Comer in the sub-regional round.

“We’re going to bounce back,” Williams said. “We’re just going to get back to work on Sunday and get ready to finish up.”