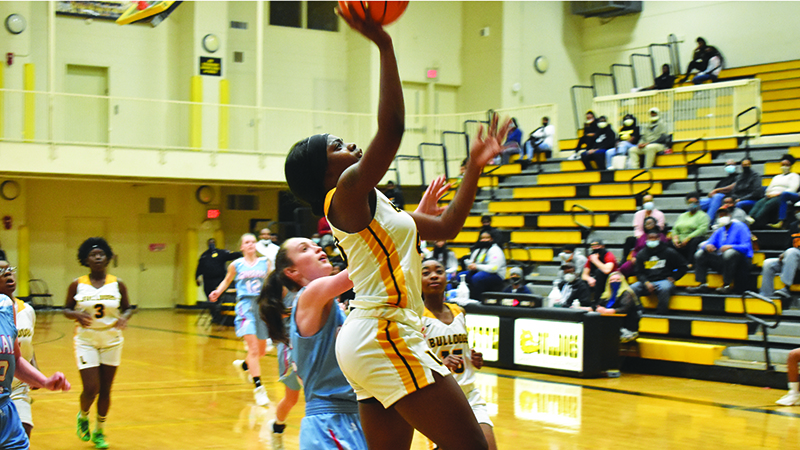 For most of the first half, the LaFayette girls basketball team was struggling to score. It was forcing turnovers, getting good looks around the rim and from 3-point range, but shots just weren’t falling. In the second half, the Bulldogs jumped on Horseshoe Bend dominating their first area tournament game 63-48.

“We lacked energy,” head coach Fred Bridges said. “We had no intensity and [had a] lack of energy. There’s no other way to put it. What changed the dynamic of the game was our pressure on defense. We had a couple of key steals. We probably had 10 turnovers in the first half alone. The farther we go into the state playoffs, we can’t have those types of mental mistakes. We have to take care of the basketball and have high energy.”

“Each win entering into the state playoffs is huge,” Bridges said. “That makes a statement for your team and the Lady Bulldogs program itself. The direction that we’re going, I’m excited about it, and we just continue to build the program in the right direction where we envision it to go.”

In the first quarter, LaFayette was flat offensively. It wasn’t executing the plays Bridges was calling out. On fast-break attempts, layups were rolling out of or hitting off the side of the rim. While the Bulldogs were struggling on offense, Horseshoe Bend was slowly building a lead. The Generals weren’t firing on all cylinders by any means, but they knocked down enough shots to have the lead. LaFayette scored its first points of the game with 2:57 left to play, cutting the lead to three points. Horseshoe Bend answered by rattling off five consecutive points before LaFayette scored again.

LaFayette trailed by three at the end of the quarter. It took the first five minutes of the second quarter before the Bulldogs evened the score at 15. Once they tied the game up, the Bulldogs were off to the races. They converted several fastbreak opportunities as the Horseshoe Bend turnovers started to mount.

As a team, LaFayette never really got into a rhythm, but senior Feliah Greer put the team on her back for the entire game.

Greer finished with 39 points in the game, finishing as the lone Bulldog in double figures. She scored 16 of the 17 LaFayette points in the second quarter and added 13 of the 19 third-quarter points.

“Her energy alone was unbelievable considering that she’s sick,” Bridges said. “The way that she put the team on her back and just carried us through to a victory. There’s not much you can say about that, but for us to make a deep run in the playoffs, we can’t rely on Feliah to score 20 or 30 points. Everybody has to contribute. Everybody knows they have a role to play. Once we mix that together, we’ll be fine going deep in the playoffs.”

LaFayette will host Lanett on Friday at 6 p.m. EST/ 5 p.m. CT in the area championship.