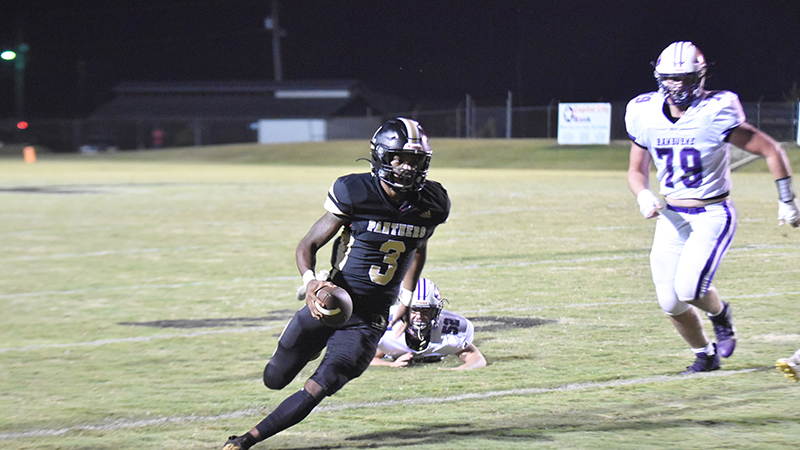 In the weeks after his high school football career ended, Lanett’s Kadarius Zackery earned several college offers to schools throughout the country. On Jan. 18, he announced the final schools he was considering: Delta State, Morehouse College and the University of West Georgia.

A little more than a week later, he committed to West Georgia. The deciding factor was the college itself.

“Really, once I got on campus, I knew it was the place for me,” Zackery said. “Just touring the campus and talking to the people, it just felt like home right when I stepped on campus.”

Zackery was a dynamic player in his two years at Lanett. As a junior, he was a shutdown cornerback, earning First-Team All-State honors from the Alabama Sports Writers Association. As a senior, Zackery played safety and was a big part of the Panthers’ offense, taking over as the team’s quarterback halfway through the season.

As the team’s quarterback, Zackery threw for 1,025 yards and 15 touchdowns, while running for 879 yards and scoring 13 touchdowns. He also added 124 yards and three touchdowns as a receiver.

As a safety, Zackery was a perfect center fielder, finishing with 72 tackles and nine interceptions. He added 16 pass deflections and forced five fumbles.

He said that his experience on defense really helped him adjust to playing quarterback because he knew how teams would play him, and he knew what to look for in the secondary.

While his stats are one of the first parts of Zackery’s game that people notice, he stepped up more as a leader during his senior year, something he takes a lot of pride in.

“Just maturing after my junior year and becoming a leader,” Zackery said of his biggest step between junior and senior year. “I know Coach [Clifford] Story had wanted me to step up, so I had to step up and become a leader.”

Because he had to learn how to work extremely hard to become a leader at Lanett, Zackery believes that will give him a step up when he arrives at West Georgia.

“Just me dominating high school, I feel like, if I go down to West Georgia and grind like I did at Lanett, I can find me a spot on the team early on,” Zackery said.

“The reason I like playing cornerback is because I can talk junk to the receiver and get my hands on him,” Zackery said.

West Georgia has a history of being a good football team. The Wolves struggled a little bit last season, finishing 6-5 after a 10-2 record in 2018. One of the drawing factors for Zackery was that winning tradition, especially since he has grown accustomed to it at Lanett.

“They’re one of the top programs in D-2, and I just want to be in a winning environment because I’m used to winning,” Zackery said.