Lanett boys advance to region game with win over Vincent 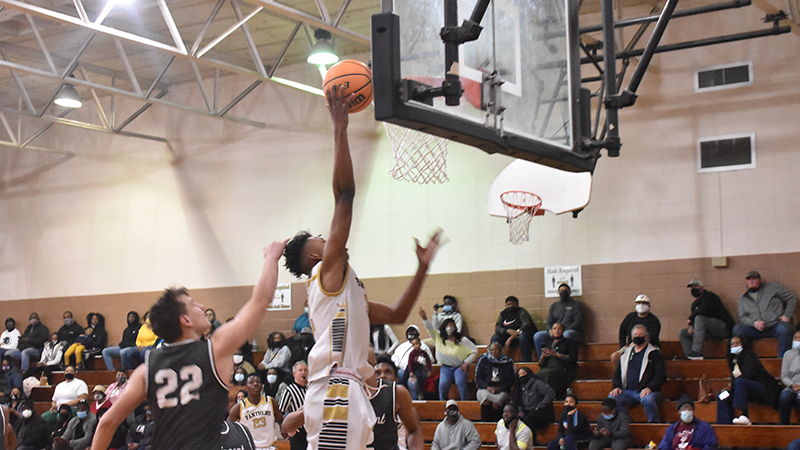 After delaying its sub-regional game by a day because of poor weather, the Lanett boys basketball team came out with the same energy it had on Saturday in the area championship against LaFayette. The Panthers forced turnovers, leading to easy transition points and a 68-33 win.

The game plan coming into the game was to make Vincent try to score in the paint, as the Yellow Jackets excel in shooting from behind the arc. To do this, Lanett came out in a three-quarters press, which has been its best defensive set to force turnovers for most of the season.

Though all three of their made first-quarter shots were from behind the 3-point line, the Yellow Jackets struggled to break Lanett’s press and consistently get open looks behind the arc.

“We were trying to put pressure on them and make them get the ball to the basket and make them put it on the floor,” Lanett head coach Tay McCants said. “As you can see, they still have great shooters on the outside. Vincent is a very disciplined and well-coached team. This is a big win tonight.”

Throughout most of the first half, Lanett was forcing turnovers, which were leading to quick transition points. Lanett outscored Vincent 22-11 in the opening quarter. Only eight of the 22 points were scored from outside the paint.

“We just kept doing what we’re doing,” McCants said. “Putting pressure on them at the beginning of the game. We don’t like a slow game. We like to play fast. Putting a three-quarter court press on them and pushing it in transition, that’s what gets us going.”

Vincent continued to struggle in the second quarter, as Lanett continued to force turnovers. Six of the Yellow Jackets’ 10 points were scored from behind the arc, while Lanett’s 16 points came inside the paint.

In the second half, Vincent struggled from behind the arc, as most shots fell short of the mark. On the other hand, Lanett continued to turn the tempo up, running in transition after a missed shot or turnover.

Lanett outscored Vincent 19-2 in the third, allowing the clock to run for pretty much the entire fourth quarter.

“I saw confidence, that’s my main thing with him,” McCants said of Cheeks. “If he does something bad, he’s been dropping his head. I decided to give him a start, and he showed that he might have needed that to get him going. Teo, we need him on the outside to be a sniper for us. He did a great job on the defensive end.”

The Panthers will travel to Cottonwood on Friday for its regional matchup. Cottonwood narrowly defeated Atriton in its sub-regional game on Tuesday.

“They have two dogs at the guard position and a big guy inside. We’re going to keep doing the same thing that we’ve been doing,” McCants said. “We’re going to be applying pressure full-court and keep pushing it in transition. We’re going to see if they can run with us.”