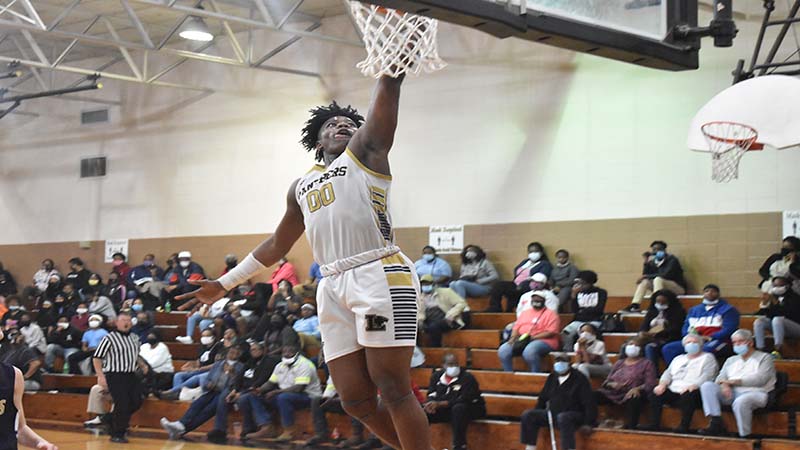 The goal for the Lanett boys basketball team was to get to Birmingham and play for a state championship for the second straight year. It took the first step on Wednesday, defeating Randolph County 72-31 in the second round of the 2A Area 7 tournament.

“It was a big win for us because we’re trying to go 7-0,” head coach Trentavious McCants said. “That’s all we’ve been preaching since the area started. This was the first one, so we’re 1-0. I feel like if we can go 7-0, we’ll win a state championship.”

Lanett jumped on Randolph County in the first quarter. It scored the game’s first points and immediately jumped into its three-quarter press, which allowed it to speed the game up by forcing turnovers in the backcourt.

“It just shows that we’re punching people in the mouth first,” McCants said. “Our whole year, people have been saying that we’re a second-half team. When we go out and do stuff like we did tonight, causing a lot of turnovers in the first quarter, it shows that we’re a full-game team Our guys did a great job of running the press and putting pressure on them.”

The Panthers outscored the Tigers 16-4 in the opening quarter. All 16 points were scored around the rim.

In the second quarter, Randolph County broke through the press several times and started to knock down shots, scoring nine points in the quarter.

“I knew they were pretty good,” McCants said. “They have some pretty good shooters. I think we did a pretty good job on the defensive end putting pressure on them and trying to make them drive to the basket. We forced a lot of turnovers in our three-quarters press, and that helped us out.”

Six of the nine Tiger points were scored inside the arc.

After leading by 16 at halftime, Lanett turned up the speed of the game again, scoring 27 points in the third quarter. The Panthers used their athleticism and size to dominate the paint while knocking down three 3-point shots in the process. They outscored Randolph County 27-12 in the quarter.

“We’ve been needing another guard on the court. Bryant is our x-factor,” McCants said. “He gives us a lot of energy. He can score for us, [and] he plays hard on the defensive end. Having him on the team really took care of a lot of problems we had earlier this season. He gives us a lot more depth at the guard position, and that’s what we need heading into the playoffs.”

Lanett will host LaFayette in the area championship on Saturday.