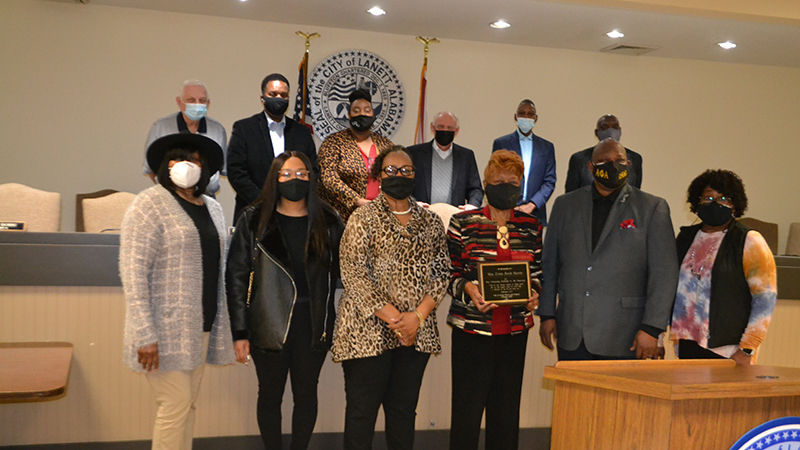 LANETT — As a special event for Black History Month, five community leaders were honored with plaque presentations Monday evening. The awards ranged from a posthumous award to a Lanett woman who fought for equal rights during the era of Jim Crow segregation to a current city official, Lt. Teddy Morris, who is now serving as the city’s building inspector.

The posthumous award went to Mrs. Erma Ruth Johnson Harris. A group of family members including her daughter, Lanett City School Board President Gwen Harris Brooks, received the award in her behalf.

Mrs. Harris was born in the West Shawmut community in 1928. From the 1950s through the early 2000s, she was a trailblazer seeking equal access for local African Americans. She registered hundreds of people to vote.

In making a plaque presentation to her family, Council Member Tony Malone noted that she was doing this at a time when there was separate and unequal access to housing, education and employment opportunities.

“Those roadblocks did not stop her in her fight for justice,” Malone said. “She pushed on and became a member and an officer for the Chambers County unit of the NAACP. She was also a member of the Alabama Democratic Conference (ADC), a political organization focused on getting black people elected to public office.”

Malone went on to say that when a tornado destroyed the Drew School in West Shawmut in 1970, Mrs. Harris was a strong advocate in getting it rebuilt.

“She wanted to make sure black children had a good building they could learn in,” Malone said. “Erma Harris was a laborer in God’s vineyard. She spoke truth to power and wasn’t afraid of a challenge when it came to demanding justice.”

Mrs. Harris was the first black woman to serve on the Huguley Water Authority Board of Directors. She was a founding member of the local Community Action Agency that began a Head Start program in the building that went up to replace the Drew School. It’s now the Bowen East District Center and a very active Head Start program is located there today.

In 1990, Mrs. Harris was one of the leaders of a movement pushing the City of Lanett to observe Martin Luther King Jr. Day in January and Black History Month in February.

“She was instrumental in seeing that city council elections were done by districts rather than city-wide and that the desegregation case Lee v. Macon was adhered to,” Malone said.

These actions were at the federal level, but local activists served as watchdogs to make sure local governments were doing what the courts said.

“Mrs. Harris worked with the late Ross Dunn in seeking justice and civil liberties black people have today,” Malone said. “She loved her church, Mount Hermon Baptist, her family and her community. God takes only the best and in 2013, called Mrs. Harris home to be with Him.”

Honorees including Marvin Moss, Janie L. Huguley and Katie Walton could not be there in person to receive their award due to health reasons.

Mrs. Huguley is in her late 80s and is well known for her exemplary efforts in raising children, both her own and those in desperate need of a good parent.

A native of Fredonia, Huguley has lived in Lanett since 1949. For a time, she lived with her parents in the Jackson Heights neighborhood.

“As she matured into adulthood, she began interacting kids while working for public schools in LaFayette,” Malone said. “With her strong love for children, she had her hands full at an early age, raising her own children and her sister’s six kids. She had a heart for this. It’s what she wanted to do.”

She later became a foster parent and opened her home to hundreds of children, some of whom were orphans who had no one to love them when she took them in. She would take in nieces and nephews when they needed strong parenting.

“Janie Huguley was a pillar in the community,” Malone said. “She was well known, loved and respected by many people in the community. She wore lots of hats. She was a mother to many but also a woman of God. She remains a paragon of honor, respect and human dignity.”

Mayor Kyle McCoy presented an award to Lt. Teddy Morris, the city’s current building inspector. From 2006-09, he was the city’s first African-American police chief. He left the city for a time but came back in recent years to be the inspector.

“Dr. Martin Luther King Jr. famously said that we should judge people by their character and not by the color of their skin,” McCoy said. “Teddy Morris embodies those characteristics as well as anyone I have ever met. He treats everyone the same. Whether you are white, black, Latino or Asian, he sees you as an equal and treats you that way.”

“Before the 1970s, black people living in this area could not be elected to public office or have a fair chance at a good-paying job or good housing,” he said. “Talk to anyone who lived here in the 1930s, 1940s, 1950s or 1960s and ask them how hard to was back then. If we look around today, things are much better. Black people are serving on this council, on our city school board, in county government and in nearby cities, counties, at the state and at the national level. It’s good that so much progress has been made. We need to continue celebrating MLK Day and Black History Month because we don’t want to forget the sacrifices made by those who came before us.”

“I’m glad our city and our county has made this progress over the years,” McCoy said. “African Americans have made so many sacrifices to get to where they are today. The reason we have programs like this is that we will never forget and will never go back to the way things once were. We will keep going forward.”

“Everyone we recognized tonight is so deserving,” she said.