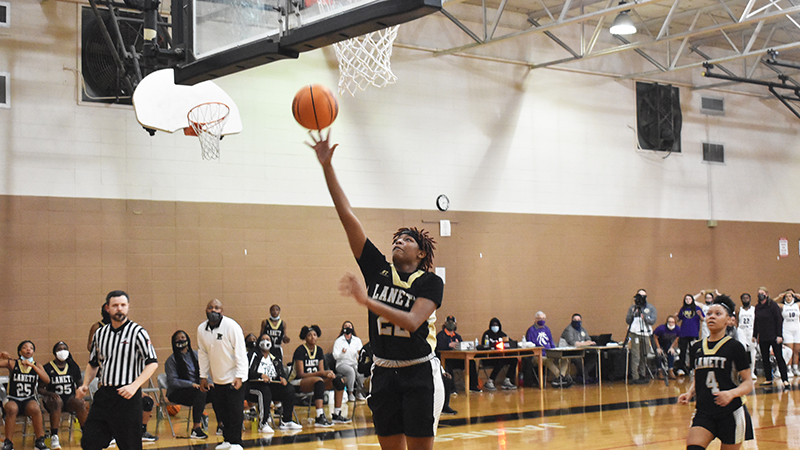 For the first time in five years, the Lanett girls basketball team is heading to a regional championship. The Panthers fought for 32 minutes against No. 6 Geneva County, grabbing the lead for the first time in the fourth quarter and holding on for a 54-46 win.

“It’s huge. It’s huge for Lanett’s women’s programs,” head coach Charlie Williams said. “Lanett women’s athletics gets overlooked so much because our boys are good. Our boys have a great program, but our girls get overlooked. It’s huge for our program because now I have girls walking up to me in the rec games telling me ‘hey coach, I want to play at Lanett one day.’ That’s big when you have kids that want to play for you.”

Throughout this season, the Panthers rallied around the team motto of “prove them wrong,” and with their backs against the wall at home, the Panthers proved their critics wrong.

Geneva County was the No. 6 team in the state and had Karoline Striplin, who is a University of Tennessee signee and set an AHSAA record earlier this season for most consecutive free-throws hit (44). If that wasn’t enough, the Bulldogs started the game on a 12-2 run.

“A lot of people didn’t give us a chance this season. They wrote us off early,” Williams said. “My seniors got together and came up with the motto ‘prove them wrong.’”

It took a little while for Lanett to settle into the game. The Panthers were struggling to stop Striplin and Anri Davis inside, while on offense, the shots weren’t falling.

At the end of the quarter, Lanett trailed by 10.

“A lot of people don’t know, this is our first home game in a long time,” Williams said. “They just had to get the nerves out. On the road, it’s you on the bus, riding and getting your thoughts together. The bus ride kind of prepares you for the game. At home, you go to school, you’re getting texts and phone calls all day. It’s kind of hard to get into a rhythm at home. I know a lot of people say ‘I’d rather sleep in my own bed and play at home.’ My girls prefer to play on the road. They love being underdogs.”

Thursday was Lanett’s first home game since Jan. 30 when the Panthers narrowly defeated Callaway. Since that Saturday, Lanett has traveled to Ranburne for the first round of the 2A Area 7 tournament, coming away with a win against a team it had been swept by in the regular season, LaFayette for the area championship, which it lost on a near-buzzer beater shot and B.B. Comer in the subregional.

Its offense started to get into a rhythm in the second half of the first quarter, as the Panthers buried a pair of 3-point attempts in the final four minutes.

In the second quarter, junior Breanna Glaze started to get it going. In the win against B.B. Comer, Glaze finished with 21 points. She bested that performance on Thursday, finishing with 31 points. Glaze scored 10 points of the Panthers’ 14 second-quarter points, hitting a pair of 3-point shots in the process.

Lanett kept pace with Geneva County coming out of the halftime break, but it really got into a rhythm in the fourth quarter.

The Panthers turned up the tempo against Geneva County in the fourth. Off a missed shot, Lanett was finding outlet passes down court, which led to an easy layup.

Lanett outscored Geneva County 25-8 in the fourth quarter. Glaze scored 13 of the 25 points.

Lanett iced the game finishing 6-of-6 from the free throw line. Sophomore Ameria Zeigler hit four of the six.

“She’s huge. She’s my point guard,” Williams said. “I get on her a lot because I love her and because I played point guard, so I know what I want out of her. Ameria, if she continues to grow mentally and with her skill set, she’s going to be the next one to get up out of here for basketball. She has that. She doesn’t get shaky. Even when she was missing, she wasn’t shaking.”

Zeigler finished with 11 points, six of which were in the fourth quarter.

Lanett will take on the winner of LaFayette and G.W. Long, who play on Friday.