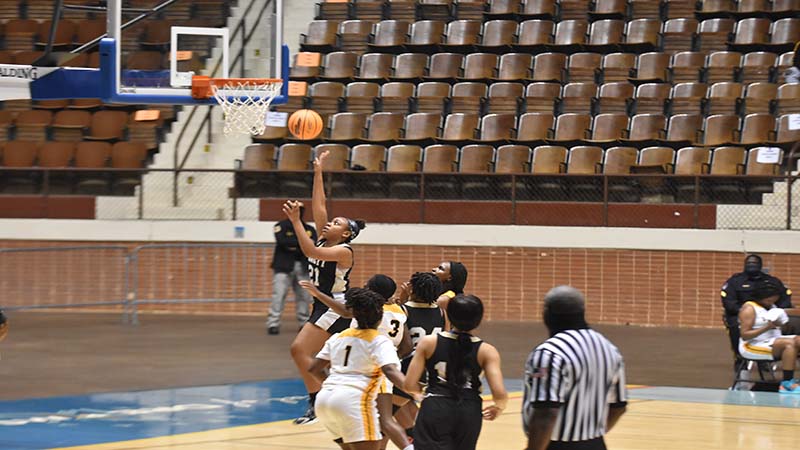 For the first time since the 2011-12 season, the Lanett girls basketball team is heading to Birmingham.

In their fourth matchup of the season, Lanett bested rival LaFayette 53-46 in the 2A Southeastern Regional Championship.

“It’s different being a head coach. I’ve been here several times with the boys team when we won the state championship in 16,17 and 18, so this is my first time as a head coach. I’m still trying to soak it all in,” head coach Charlie Williams said.

The first three matchups this season went down to the wire as they were decided by eight total points. Thursday’s game followed the same formula.

“All of our games have been close,” Williams said. “It’s just familiarity. The girls know each other. They grew up together, and have been playing each other for years. It’s more about relaxing. I told the girls whoever made the most layups, hit the most free throws and took care of the ball the most was going to win the ball game.”

Thursday’s game was almost identical to the 2A Area 7 Championship game.

With less than three minutes to play in the game, Lanett led LaFayette by four. The Panthers’ lead, which had been seven points at one point in the quarter, was slowly dwindling as the clock ticked closer to zero.

In the area championship game, Lanett failed to hold onto the lead, turning the ball over several times in the final three minutes before LaFayette’s Ebony Williams sunk a 3-point shot in the corner with less than three seconds left. On Thursday, Lanett broke the Bulldogs’ press and held onto the ball, cutting chunks of time off the clock before LaFayette fouled or allowed a shot.

Williams said the key to holding onto the ball and building and holding onto a late lead was his team’s maturity.

“When I walked back through the gates into the dressing room, you can usually hear them conversing about the game. [Today] there was no talking,” Williams said. “Any other game they would have been going at each other [saying] ‘you didn’t do this or do that.’ Now I have to play parent instead of coach.”

Like he did in the previous two matchups, Williams ran two different defensive sets, 1-2-2 three-quarters press and a box-and-one on Ebony Williams.

“She provides another dimension to their offense. If she’s knocking down outside shots, Feliah [Greer]’s driving lanes are humongous,” Williams said. “Even though she had 23 points, most of those were off free throws, which means she was getting in the lane. When you put a box-and-one on Ebony, it gives you more help in the middle. Feliah had to make some tough shots tonight.”

With Williams effectively taken out for most of the game, LaFayette had to rely heavily on Feliah Greer.

Greer finished with a game-high 23 points. She affected the game in her normal way, pushing the tempo and getting shots inside the paint. Though most of her shots weren’t falling in the paint, Greer was getting to the free-throw line, hitting 13 of her 15 free throw attempts.

Lanett answered with senior Alyse Madden, who finished with 19 points. Madden did most of her damage from the paint, hitting eight of her 12 attempts.

“She’s a gamer,” Williams said. “She can post up, she can handle the ball and make the passes. She’s just a complete ballplayer. She kind of offsets what Feliah does for them. The difference was I had contributions from other girls, and I didn’t let Ebony get involved in the game.”

The difference between the two teams was the production from the rest of the team. With Ebony Williams being played in the box-and-one, LaFayette struggled to get any other player besides Greer going. Lanett had four players hit multiple shots, scoring 30 of the team’s points, while LaFayette had two players finish with multiple made shots, scoring just 14 points.

Lanett will play Faulkville or Hatton on March 3 at 9 a.m. CT for a chance to play in the 2A championship.