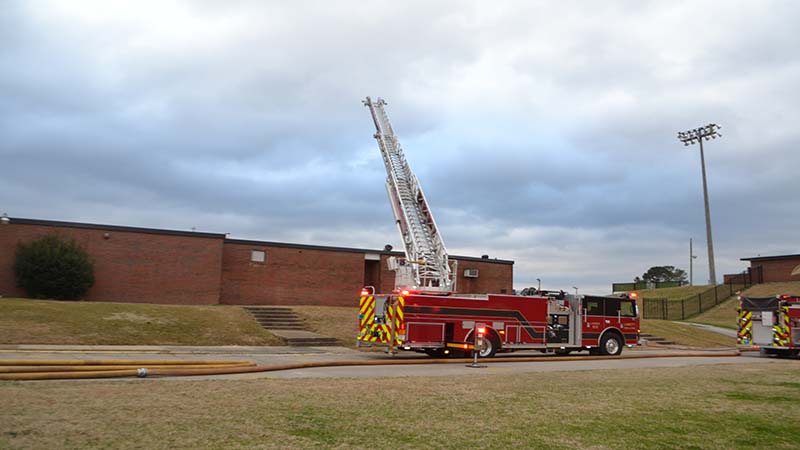 LANETT — Lanett High School caught fire on Monday morning, and coaches’ offices, a film room and weight room were extensively damaged. No one was injured.

The blaze was spotted by LHS Principal Bryant Lumpkin and assistant coach Ernest Webb at approximately 7:50 a.m. EST. The area on the far right of the school campus was fully involved with fire at that time. The Lanett Fire Department was immediately contacted, and three units including a ladder truck were on the scene in minutes. Fast action on the part of a dozen firefighters kept the damage from being far worse than it could’ve been.

Had the fire spread sideways instead of up and out, the school gym could’ve been lost.

“I would hate to think what would have happened had the fire started at 4 a.m. when no one was around,” Allen said. “It would have been far worse and the damage much more extensive. It could have been a disaster.”

Allen has lived in Lanett all his life and graduated from Lanett High in 1980. He said he’s aware of very minor fire incidents at Lanett High over the years but nothing like Monday’s fire.

“There’s some fire and a lot of smoke and water damage,” he said. “I think we’ll be able to salvage some of the memorabilia in the coaches’ offices.”

Head Coach Clifford Story has been in high school coaching for 21 years now and said he’s never before experienced anything like this.

“This sets us back, but we don’t know how much right now,” he told The Valley Times-News. “The main thing is that everyone is safe and sound. It’s a good thing Mr. Lumpkin and Coach Webb spotted it when they did and called the fire department. They told me that flames were coming out of the roof and from the side of the building. It’s bad, but it could have been much worse. I know I’ve lost a lot of things that cannot be replaced.”

Those items include 12 years of trophies, banners and photographs of special moments at Lanett High over the past 12 years, including state championships in 2017 and 2019.

“I’m glad we caught it when we did,” Story said. “Had the fire started earlier, we might have lost the whole gym. We are so grateful it didn’t spread that far. This is a bad day for Lanett High, but we will be back. We have a very supportive community behind us. We will rally together and get past this.”

Allen said he suspects it was a fire of electrical origin.

“We have contacted the state fire marshal about it,” he said. “It’s protocol for us to do that anytime there’s a fire in a city-owned building. We will determine what the actual cause was.”

The school system posted on social media that the school would be closed on Monday.

“The safety of our students and staff remains a top priority. As a result of the fire at the high school campus this morning, our entire facility is without essential utilities. These services will not be restored until it has been deemed safe to do so,” LCS superintendent Jennifer Boyd said in a statement. “On-campus classes will be suspended for Lanett High School and Lanett Junior High School students until we have been cleared to bring students back on campus. We hope to have these issues resolved swiftly so that on-campus classes can resume.  At this time, no one is allowed to visit campus.  School administrators will provide details regarding student courses and assignments at their discretion.”