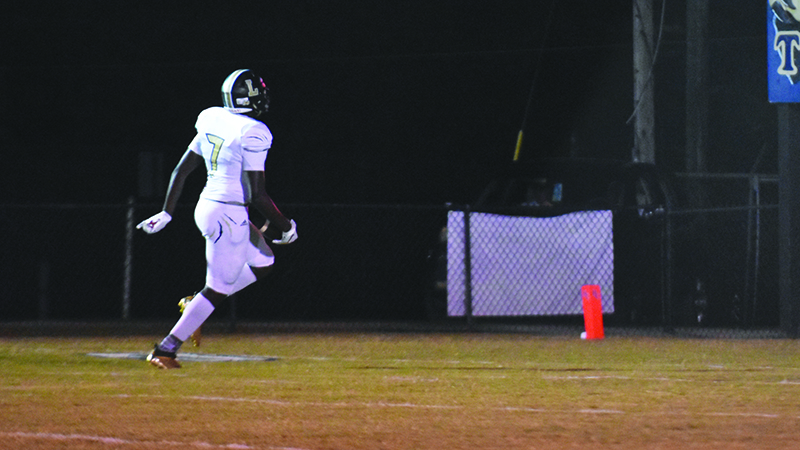 Lanett’s 2020 leading receiver has chosen where he will continue his football career. In a Facebook Live video, Lanett senior Trey Abner announced that he would play football for Fort Scott Community College in Fort Scott, Kansas.

Abner was an all-around threat at Lanett the past few years but stepped up as a senior. From his tight end position, he led the Panthers in catches, receiving yards and touchdowns, finishing with 34, 541 and eight respectively.

He also finished with 21 pancake blocks and an 87 blocking percentage.

His play earned him an honorable mention on the Alabama Sports Writers Association’s All-State team as a wide receiver (the list does not have a tight end category).

He will continue to play tight end at Fort Scott. Because of his ability to block and catch, the Fort Scott coaching staff talked a lot to Abner about his ability to cause problems for defenses.

“They told me I could be a niche factor for defenses. I can be split out like a receiver or come in and block. It’ll be hard for defenses to know what I’m doing,” Abner said.

Abner made his decision based on Fort Scott’s coaches having more of an interest about his future than just his athletic ability.

“When the coach came to see me, we talked about me as a player there and my academics. I felt like for him to come here and talk about all that stuff, made me feel like I was at home,” Abner said.

Abner is one of four Panthers to commit to a college for the 2021 season, joining Kadarius Zackery (West Georgia), Kelvin Zachary (Faulkner) and Seidrion Langston (Independence Community College).

With Abner committing to play at Fort Scott, he will have the opportunity to play Langston in college. Langston will play a hybrid safety-outside linebacker role at Independence, meaning he will most likely line up against Abner in that matchup.

“We’ve talked about that,” Abner said. “I think that’s going to be cool because I’ve always played with him. We’ve been friends ever since he came down here from his school in Georgia. Us playing against each other is going to be different, but it can be very exciting. He plays defense and I play offense, so I think it’ll be a good matchup.”

Fort Scott has sent players around the country after their time as a Greyhound has expired. Two alumni, Jason Pierre-Paul and Lavonte David, will be playing for a Super Bowl on Sunday.

“This year, since they didn’t have a season, they were still signing people, so that played a big part [of his decision],” Abner said. “I didn’t have the offers that I wanted when the season ended or when it started, but for me to go there, it puts me in a better situation for me and my future.”