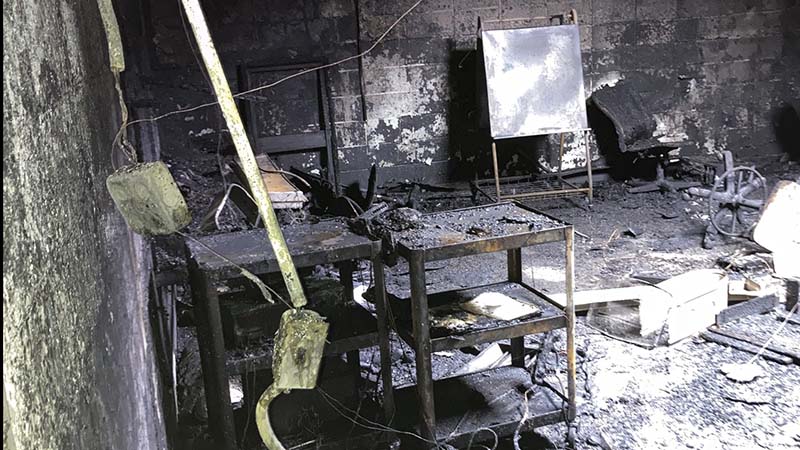 LANETT — The Lanett Fire Department and the Alabama State Fire Marshal’s office have both confirmed that the Monday morning fire that gutted the Lanett High field house was an accidental electrical fire, according to Lanett Fire and EMS Chief Johnny Allen.  Extensively damaged in the fire were coaches’ offices, the film room, the LHS weight room and locker area.

Allen wants to debunk rumors that the gym was lost as well.

“Except for some minor smoke damage, the gym escaped any damage from the fire,” Allen said. “That’s something that can be cleaned up without much of a problem.”

Allen does have concerns about the structural integrity of the part of the building that was damaged by the fire. The roof is gone, and the concrete block walls were extensively damaged.

“I have voiced my concerns to the insurance company on whether the walls are safe. I will express those same concerns to the structural engineer and the architect when I meet with them,” he said.

It might be best to build back the entire field house.

“The insurance company will make that determination,” Allen said. “I think it would be better to have an entire build back.”

Allen has high praise for the way Lanett firefighters responded to the fire.

“I can’t say enough for my guys,” he said. “They were there in four minutes. The building was fully involved with fire coming out of the roof and walls.”

One quick action on their part may have saved the gym. Three firefighters went up on the roof and broke out the skylight. This directed the fire upward and outward, rather than rolling on toward the gym. This allowed the firefighters to get control of the fire and beat down the blaze with powerful water streams.

In addition to the burned-out area, the structural engineers and architects will be looking at the gym as well.

“Just looking at it with the naked eye, it looks fine,” Allen said of the gym, “but we want to make sure.”

Lanett High has been closed for classes the past two days. Superintendent Jennifer Boyd will decide when the students can safely return to campus.