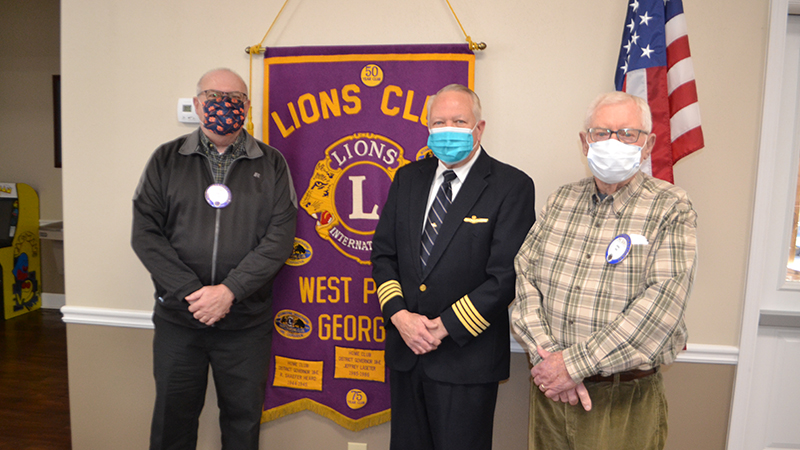 WEST POINT — Long-time pilot Brad Lynn was the guest speaker at Wednesday’s noon-hour meeting of the West Point Lions Club. He talked about his long-time career in aviation and the airline industry in general. He was in the U.S. Air Force and Air Force Reserves for the better portion of 30 years and then accumulated more than 20,000 flying hours, mostly on international flights across the Atlantic.

He’s flown such aircraft as the KC-135, has worked at the Pentagon and served a tour of duty in Afghanistan. He was a captain for United Airlines for a number of years and now holds the prestigious position of being the chairman of the board of governors of the Civil Air Patrol.

Lions Club members were treated to a discussion about flying by someone who has a rare amount of experience in the field.

Lynn wore his United Airlines captain’s uniform to the meeting. He joked that he’d done so as a joke to his wife, Wendy.

“I told her that United Airlines had raised the retirement age to 70 and that I was going back to flying,” he said.

At one time, the Lynns lived in the Denver area but relocated back home for its proximity to Atlanta.

Lynn said that he liked to kid fellow pilots who live north of Hartsfield-Jackson that he could get there faster and with less stress than those guys who lived on the north side of Atlanta.

Following his career with the Air Force, Lynn was hired by United Airlines in 1989. Working for a major airline, he said, has both steep peaks and low valleys.

“When things are going well for the airlines, they are really good,” he said, “but when things aren’t so good, they can be really bad. The year I was hired, United hired 1,000 more pilots after me. “

The airlines have been especially hard hit by the COVID-19 pandemic. An estimated 500 pilots were hired in 2019 and around 150 more in January and February 2020.

“When I’d fly from Dulles to Europe, I stopped trying to eat and sleep according to a schedule,” he said. “I would eat when I was hungry and go to sleep when I was tired.”

Lynn said he loved those trips to Europe.

“I loved those international flights because I liked seeing things,” he said. “My favorite trips were the ones to Munich, Rome, Amsterdam and Barcelona. I liked to go sightseeing after the flight and to get some sleep before the return trip.”

With his seniority and flight hours, Lynn was the captain on almost all his international flights. On most trips, he’d pilot the plane on the trip across the ocean and the first officer would fly the plane on the return trip.

Lynn said it has been rewarding for him to have seen the many improvements in safety that have been made over the years.

The iPad has been a great invention for flying a plane. Almost everything a pilot needs is on that one device.

GPS and virtual navigation have made landing a plane much safer than it once was.

“The one thing that will now keep you out of an airport is a thunderstorm,” he said. “You can be guided in if there’s fog or normal rain.”

The most harrowing landing for Lynn took place in a dense fog in Santiago, Chile.

“They had to take two trucks with the headlights on to guide me in,” he said.

Lynn said he knew the pilot and crew on United Airlines flight 232 from Denver to Chicago on July 19, 1989.

There were 296 passengers and crew on board that day when the plane experienced a catastrophic failure in its tail-mounted engine, which led to the loss of many flight controls.

The plane crash-landed in Sioux City, Iowa with 112 people being killed. It was a miracle that 184 survived.

“The throttle had to be handled differently,” Lynn said. “It was quite a feat that Al Haynes was able to land the plane.”

Despite the deaths, the landing is considered a prime example of successful crew resource management because of the large number of survivors and the way the crew landed the plane without conventional control.

Lynn said that air travel is not as expensive as a lot of people think.

“When adjusted for inflation, airline tickets are not as expensive as they used to be,” he said. “By comparison, almost everything else costs more.”

“When I get on a plane, I want to know someone is flying it,” he said. “Regardless of how much technology you put into it, it’s still a machine.”

One of Lynn’s prized possessions is something he wrote when he was in grade school. He wrote that it was his big dream to fly a plane one day.

“It’s a fun job and easy to do,” he wrote. “A pilot has to have good eyes to look through clouds and be brave enough to deal with lightning and thunder because he’s closer to it.”

Of course, he found out later it wasn’t always such an easy thing to do.

A member of the club asked Lynn if he was flying a plane when the terrorist attacks took place on Sept. 11, 2001.

“I had just gotten in the night before,” he said. “My wife, Wendy, was teaching at Springwood at the time.

She called to ask if I had been watching what was on TV. She then told me that a large plane had crashed into the World Trade Center in New York City.

I asked if they were having bad weather, and I was surprised when she told me it had taken place underneath a beautiful blue sky.”

The current downturn in air travel is almost entirely due to COVID-19. Lynn is confident air travel will be in for a boom once the pandemic is over.

He encourages young people to look at possible careers in aviation. “Aviation will come back,” he said. “It’s a field with a very good future. There will be a pilot shortage once we get past the pandemic.”