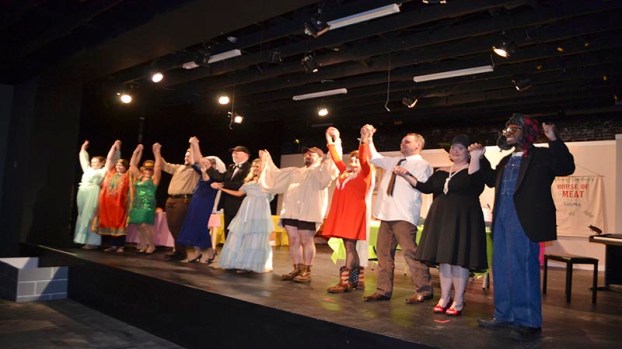 Given the limitations caused by the pandemic and the safety procedures enacted, Nixon believes the NHCT had a good season. He’s especially grateful that none of the staff, cast and crew got sick.

“We wore masks during rehearsals and took temperatures when people entered the building,” he said. “Our crowds weren’t where they normally are. Groups that came together were spaced apart at social distancing recommendations.”

Nixon said he was extremely proud of the board, staff, cast and crew for what they did in the 2020 season.

“Their passion, talent and enthusiasm is always a joy to see, whether in person or virtually,” he said. “We are appreciative of the strong partnerships we have formed with our patrons and our donors that help us create the best possible experience for us all and makes the New Horizon Community Theatre the special place that it is. We are thankful to be able to live, work and play in a beautiful, colorful building we are so fortunate to call our own. None of this would be possible without the community support we receive, and for that we are grateful.”

The theatre took enhanced safety measures to keep people safe. Hepa filters were added to the heating and cooling systems and medical grade UV lighting was in all public areas of the theatre. Temperature checks were required of everyone entering the building, and seating capacity was reduced by half.

“These were strategies recommended by public health officials,” Nixon said.

“We significantly increased the frequency of cleaning and disinfecting in all public and backstage areas beyond our standard daily schedule. We also added alcohol-based hand sanitizer for public use in the lobby and auditorium. We remain vigilant and are prepared to make decisions in response to current and future changing conditions.”

Nixon said he was proud of Saturday’s performance.

“The cast may have dropped a line or two, but they covered it well,” he said. “I think it was as good a performance as we have had by a cast in some time.”

The HNCT had planned for “Beehive” to be its first performance of the year. It was scheduled for April but was rescheduled to August because of COVID.

“Mary Poppins” went on with a greatly reduced cast and audience, and “Dracula” went on without a hitch in October.

Upcoming performances for 2021 include “Grease,” set for April 8th, 9th and 10th, “A Barrel Full of Pennies” in October and the popular musical “Big” in December.