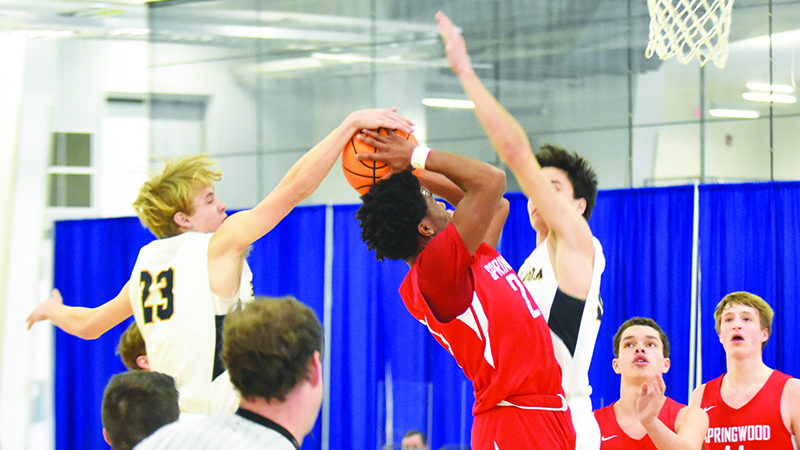 Coming into Tuesday’s AISA AAA quarterfinal matchup against Tuscaloosa Academy, the Springwood boys basketball team knew it would have to play really tight defense along the perimeter if it was going to upset the No. 1 team in the state.

Instead, Tuscaloosa Academy put on a show from behind the arc, knocking down 11 3-point shots en route to a 73-45 win.

“We had talked about what we had to take away, and that was the 3-point shot. We just didn’t execute the plan,” Springwood head coach Lisa Sampson said. “You have to give credit to Tuscaloosa, that’s a great ball team. They did a great job of getting open even though we were trying to defend. It’s a good learning lesson for us. I thought that we were going to be more competitive. Unfortunately, that was not the case.”

For the first couple minutes of the game, Springwood was dictating the pace, but it was having trouble finishing around the rim, ending possessions with a turnover or a tough contested shot in the paint. After Springwood made its first shot of the game, a three by Tyrese Ferguson, the Knights got into a rhythm. Tuscaloosa quickly moved the ball around the key and found spots in the Springwood zone that were open for a 3-point attempt.

At one point in the first quarter, Tuscaloosa rattled off nine points in four possessions. Overall, Tuscaloosa hit seven shots from the floor, three of which were behind the arc, while Springwood made just two, digging itself a 19-5 deficit by the end of the quarter.

“We weren’t rebounding the ball well, which has been our bread and butter all year, and getting out and running. When we did get those opportunities of getting those little chippies inside, we just weren’t finishing,” Sampson said. “They hit us in the mouth early, and we never got back into the swing of it.”

At halftime, Springwood trailed by 22.

In the third quarter, Springwood started to play with some more life, especially on defense. The Wildcats were forcing turnovers and more importantly, were defending the perimeter much better. Springwood’s problem was the same as it was in the opening quarter — it couldn’t finish consistently around the rim, missing several fast-break layups.

Springwood’s fourth quarter was by far its best quarter of the game offensively, but its defense struggled.

Since the Wildcats were denying the ball along the perimeter, the Knights went inside, where they found success time and time again.

“DQ has played at a high level in travel ball, and he knows what to expect. He was mentally ready for this,” Sampson said. “He just competed. I was happy he did have a good game. Our other seniors struggled a little bit, they didn’t play their game. They all had great seasons. Will toughed it out defensively for us and was a gritty guy. It was just a tough day.”