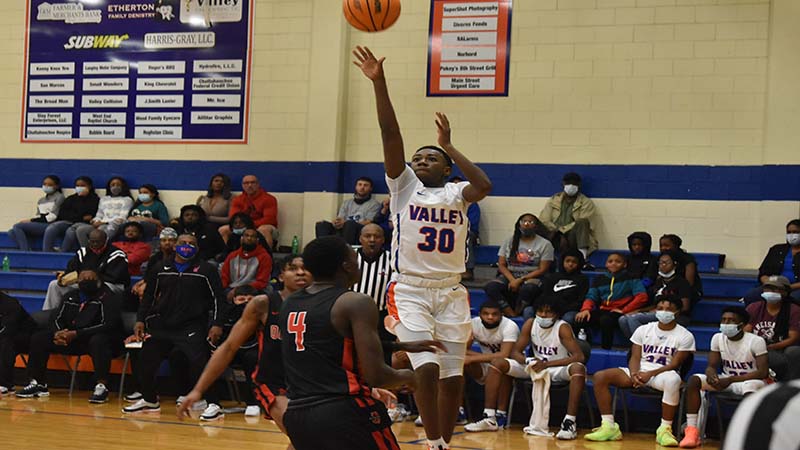 In the previous two matchups, the Valley boys basketball team has done a good job of limited Opelika’s space around the 3-point line. On Wednesday, Opelika got loose early, building a double-digit lead in the first quarter that Valley never quite overcame, losing 82-60.

“Opelika just came out and played tonight. They hit us in the mouth early tonight and we just couldn’t recover,” head coach Marshon Harper said. “We got it down to about eight points [early in the third quarter] but we turned it over a couple of times and it just went right back up. We spent a lot of energy trying to fight back. Hats off to Opelika, they came out to play tonight.”

Opelika dominated the opening eight minutes of the game. The Bulldogs were moving the ball well, usually finding an open shooter to end a possession. Of the 10 shots they hit in the first quarter, six were behind the arc.

“Opelika wasn’t missing tonight,” Harper said. “We tried zone. We tried to trap when we were playing man. Every time someone was open, they knocked the shot down. They hit some big shots. It wasn’t just one person. Hats off to them. They came to play.”

Valley’s answer in the quarter was senior Quez Trammell. Trammell was effective inside for the Rams, scoring eight of the team’s 14 points inside the paint.

At halftime, Valley trailed by 10 points, which it dwindled down to eight points halfway through the quarter with a layup by Jamarious Martin. The Rams’ offense was scoring and building momentum as Opelika wasn’t shooting with the same accuracy in the first half. Then the Bulldogs caught fire.

For the final 4:30 of the third quarter, the Bulldogs could do no wrong. They capitalized off Valley turnovers, scoring several straight possessions off a turnover.

They finished the quarter on an 18-4 run.

The Opelika run took away all the Rams’ momentum in the game, as their offense struggled to get back into a rhythm in the fourth quarter.

“We moved to 6A and a lot of people didn’t think that we could compete in 6A, but we competed,” Harper said. “The kids have to take a couple of weeks off and we have to go back and grind.”