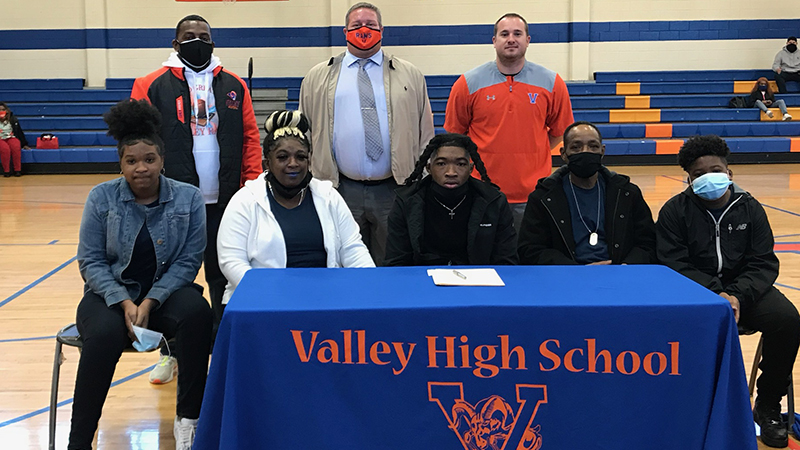 After a long recruiting process, Valley’s Tino Linson has found his home. On Wednesday, Linson signed his official letter of intent to play for the Phenix City Buccaneers Sports Academy, a football program that will allow Linson to develop on the field and in the classroom before playing his final two years of eligibility elsewhere.

“It was a good experience,” Linson said. “Everyone was behind me. Everyone supported me no matter where I had decided to take my talents. I really liked it.”

Linson was originally committed to playing for Wisconsin Lutheran, but after visiting the campus in the winter, his least favorite season, and talking with his parents, he decided to reopen his recruiting to find the best place for him and his future.

Like he was going to do at Wisconsin Lutheran, Linson will play safety at Phenix City, so getting a chance to play that new position and develop will be big for his future.

“We were thinking why would I go to a four-year [school] and not prepare, academically and physically prepare,” Linson said. “If I’m going straight to a four-year [school], and I know that I need improvements on the field, that would be me wasting two or three years before playing my senior year. Why not go to a two-year, get some experience, get better and improve then transfer to a Division I school or a bigger school?”

Linson was a force for Valley in the middle of the field. He was always around the ball at his middle linebacker spot and was one of the major leaders on the defense.

In five games this past season, Linson finished with 39 tackles and had one sack.

During his recruiting process, one of Linson’s goals has been to find a spot away from Valley so he could have a chance to grow and develop on his own. While Phenix City isn’t the furthest city away, he still believes he will be able to achieve the growth he is looking for.

Linson will be part of the first recruiting class for the Buccaneers. They will start their inaugural season at Palmetto Prep Academy, which has sent several players to Division I schools, on Aug. 29.

“I could really be a part of history, plus it is closer to home,” Linson said of being part of the inaugural team.