Believing in himself, Atkinson finds confidence during junior season 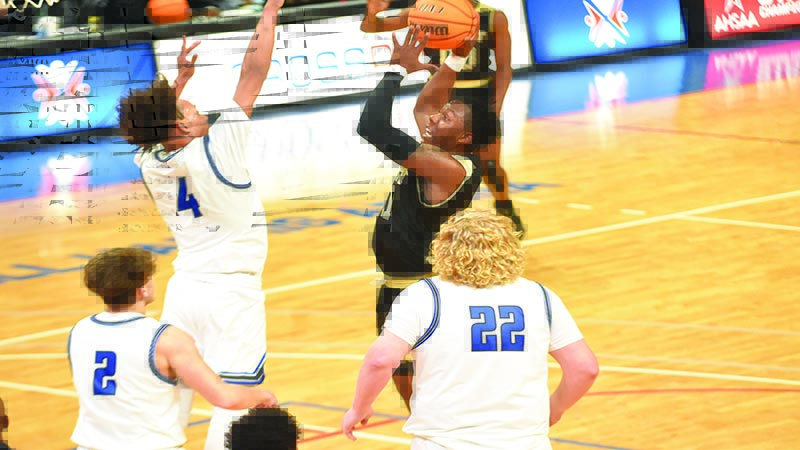 Early in the season, Lanett boys basketball head coach Trentavious McCants knew that he needed to find a third player that was consistently scoring for Lanett. He had seniors, Kintavious Dozier and Trey Abner consistently scoring in double figures, but as a team, Lanett was still trying to find its identity.

One of the players that McCants instilled his confidence in early in the season, moving him into the starting lineup and increasing his minutes as the season went on, was junior Markavious Atkinson.

McCants’s plan worked, as one game away from winning a state championship, Atkinson is a threat on both sides of the floor.

“I’ve seen a boost of confidence and his love of the game has expanded because he’s having fun right now,” McCants said. “At the beginning of the season, he got down on any little thing that happened. Now, he just plays basketball carefree. I told him as long as he’s on the court, just have fun, and that’s what he’s been doing. His rebounding has picked up, points and he’s been getting a lot of steals. I feel like he’s our x-factor.”

This season is Atkinson’s second full year at Lanett. As a sophomore, he showed glimpses of what his potential was, but he couldn’t ever put it all together, as he lacked confidence in himself to play a complete game.

Now as a junior, Atkinson is confident in himself and isn’t hesitant to make a play like last year.

“Last year, I didn’t have a lot of confidence dribbling and rebounding the ball,” Atkinson said. “This year, with my coaches, they helped me come out of my shell. I just had to tell myself that I had to be a better player for my team, so I had no choice but to get my confidence up.”

This year, Atkinson is a well-rounded player, as he has shown he can score from the outside, inside and on the fast break. He can also handle the ball as a guard but post up as a forward depending on who is on the floor.

“I had to work on my ball-handling and shooting for the simple fact that I knew my team would need me this year,” Atkinson said. “We didn’t have people like Kristian Story, Quae Houston and Cameron [Boozer] and Zameron [Boozer]. I just had to work hard in the summer.”

Atkinson is one of the few players on the Panthers roster that played in last year’s state championship loss to Pickens County, as only four players from that team were on the varsity team the entire season. He knew that as a junior with that experience, he needed to step up more as a leader to help Lanett reach Birmingham for a second straight season.

“It helped a lot because I knew what it took to get back there, so I could help lead my teammates back there,” Atkinson said. “I’m more vocal this year. Last year, I wasn’t as vocal because we had a lot of leaders.”

In the Panthers’ win against Hatton in the state semifinal game, Atkinson delivered on the offensive end of the floor, finishing with 12 points. A bigger stat is the work he was putting in on the offensive glass, collecting eight of the 23 offensive rebounds.

Because of his ability to play different roles, McCants thinks Atkinson will be a mismatch for Midfield in the state championship game on Saturday.

“I think he’s going to be a mismatch for them on the offensive end,” McCants said. “He’s long enough to be able to guard some of their guards too. I feel like if he can continue to rebound on both ends of the floor, we’ll be good. I’ve been telling him, in particular, to limit them to just one shot. If we can do that by getting rebounds on both ends of the floor, I think we’ll be good.”