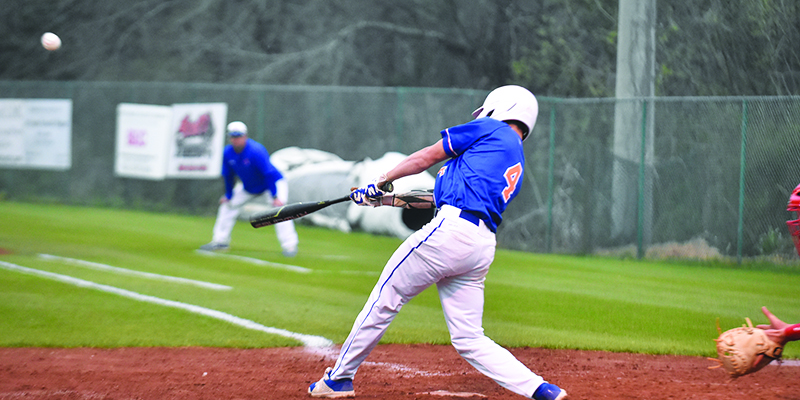 The Valley baseball team struggled for most of this season to string together hits and score runs in bunches. The Rams had no trouble getting solid contact and scoring runs on Tuesday, defeating area opponent Eufaula 9-2.

“Pretty much from the third inning on, we barreled pitches up,” head coach Patrick Shivers said. “We caught on to him a little bit. He threw well the first two innings, and I was being a little over-aggressive in the [second] inning, but that’s the type of baseball that we have to play to be successful. We have to be aggressive on the base paths, especially with two outs, and make the team make the play to beat you. They did it twice tonight, they threw us out twice tonight. But from the third inning on, I thought we had good, aggressive approaches at the plate, barreled pitches up and came up with several clutch two-out outs base hits to score some runs.”

For the first two innings, the Rams were squaring up pitches but the ball was going right at the Eufaula defenders. With the solid contact, Valley had a chance to take the lead in the second inning, as senior Hunter Meadows singled to left field and advanced to second on a sacrifice bunt by fellow senior CD Clark. With two outs and Meadows still on second, Chandler Bolt drove the first pitch he saw to center field, but the Tiger center fielder, threw out Meadows at the plate to end the threat.

The Rams broke the scoreless tie in the third inning, as freshman CJ Chambley singled to left field, driving in Bentley Green from second. The Rams were once again thrown out at the plate, however, as the Tiger left fielder threw out Will Kennedy with two outs to end the inning.

With the bats rolling, the Rams teed off on the Tiger starter in the fourth inning, scoring seven runs in the frame.

After a leadoff walk by Meadows, Clark drilled a pitch to dead left field, landed a few feet in front of the fence, putting two runners in scoring position for Trever Rudd. Rudd singled to the opposite field, scoring the first run of the inning. Valley scored two pitches later as an error plated the second run of the inning.

Sophomore Cullen Kennedy knocked in a run in the inning, as he drilled a pitch to right-center field, resulting in a double. He advanced to third on a throw to the plate and scored on a Green single.

Green’s single and a walk by Will Kennedy set the stage for Chambley, who came up with a two-out double to left field, scoring two runners. Chambley scored on a double by Meadows for the final out of the inning.

Valley scored one run in the bottom of the sixth, scoring on a groundout by Meadows.

Chambley led the way for the Rams, finishing 3-for-4 with three RBIs. Meadows finished 2-for-3 with an RBI and a walk.

Freshman Jackson Sanders started for the Rams. The No. 1 pitcher in his class dominated on the mound, striking out 11 batters in his 5 ⅓ innings. He allowed two runs in the game, both of which were in the sixth inning, as he started to near his 100 pitch limit.

“This was his best outing by far,” Shivers said. “He filled the zone up early and often. You could kind of tell at one point they were going up there trying to take. After we put the seven on them, they went up there and tried to take to work him, but it didn’t work because he was in the zone. He ran into some tough luck and started tiring out. This was his longest extension of the season, but overall, he did really well on the bump for us tonight.”

The win gives the Rams their first area win of the season (1-0) and improving the Rams to over .500 for the first time this season (6-5).

The Rams are back in action on Thursday as they travel to Eufaula for the potential sweep.

“We have to go there Thursday, and we have to compete to win that first game. If we don’t win it, then we have to win the tiebreaker to keep that leg up,” Shivers said. “They’re 1-1 in area play right now. We could really set ourselves apart here if we can take care of business on Thursday. We can’t get into a situation where we’re counting on other teams. We have to take care of it ourselves, come out Thursday and win game one.”