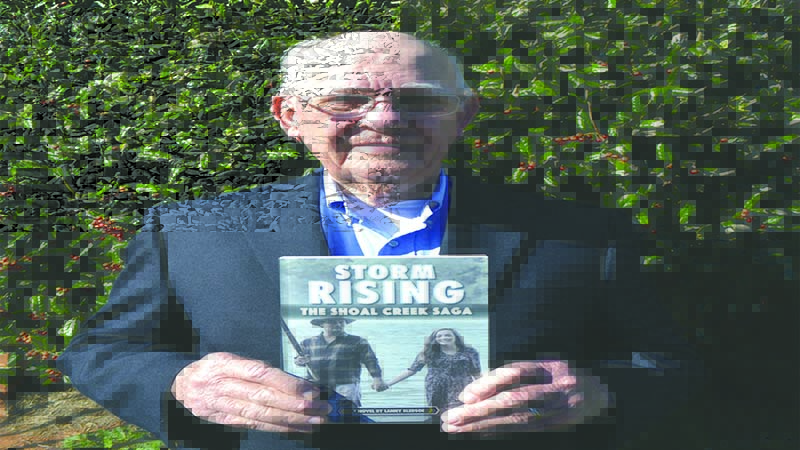 VALLEY — Lanny Bledsoe’s third book in the Shoal Creek saga is back from the printer. It’s entitled “Storm Rising” and is available at Amazon, Books A Million and Barnes & Noble. The book gets its name from major character Storm Gill and his on-again-off-again courtship of fellow River Bluff resident May Hobb. Storm is handsome, well educated and has a strong sense of honor. May is torn by her love of Storm and the lure of easy money that attractive young women like her can make in the strip clubs of Phenix City.

“It gave me something to do, and I found I enjoyed telling a story,” Bledsoe said. “It’s fiction, of course, but is somewhat based on stories I heard while growing up in River View. Some of the names I have heard before, but they are not based on real people. This is something that’s set in the 1930s. That’s 90 years ago now.”

His first book, “Shoal Creek,” was so well received that he came out with a follow-up book, “Rep’s Return.” That was popular, too, something that led to a third book.

“I’ve gotten well over 100 positive reviews on my books,” he said. “Most of the interest is local, but I’ve had people from all over the United States call me and tell me they like the Shoal Creek stories and the adventures of Rep Doe and the other characters. They encourage me to keep writing about Rep and Lila and the events of that Depression Era period.”

May and her sister, Star Hobb, live on Pot Likker Lane in River Bluff, a mill village town that sounds a lot like River View. There’s a nearby mill village known as Landon (kind of like Langdale) and River Bluff has a mill, school, teacher’s dormitory, a gym, benches along the main road where men like to sit and talk. There’s even a constable and nurse’s office in the mill where people can go if they are sick or get injured.

The people of River Bluff get along pretty well, but there are deadly conflicts with people who live across the river in the swamps and pine thickets of lightly populated Harris County.

The meanest of them might well be a character named Sugar Boy Hogg. He lives in a ramshackle dwelling deep inside Lost Man Swamp. The only ones who lived to tell about where he lived are the people who bought moonshine whiskey from him and quickly left.

When Sugar Boys wounds, and nearly kills, Rep’s good friend Rollie for no good reason, Rep decides he’s gone far enough. Despite all of Sugar Boy’s misdeeds, the Harris County Sheriff won’t go near Lost Man Swamp. Rep knows it’s up to him and those he can count on to deal with Sugar Boy.

One guy he can count on is his younger brother, Owen Doe. Rep has recently reunited with his brother after six years away from the family home he grew up in south Georgia. Rep was a teenager when he left home on foot, heading north. He’d had enough abuse handed to him by a father given to drunken rages and decided to find his own way in life. He started that journey as a boy and had grown into a man by the time he reached Shoal Creek Farm in the Chattahoochee River Valley. He had to be strong, courageous and of good judgment to make do in his new surroundings. He married a girl named Lila and fathered a young boy named Rip, but how his mom and siblings were making out back home in south Georgia haunted him. Eventually a friend named Mose drove him there in his truck. Rep learned that too much whiskey had claimed the life of his abusive father three years before. The family was doing surprisingly well. Their tenant farm home had been rebuilt and painted. It actually looked like a decent home to live in. No one in the family recognized Rep. He had to tell them who he was, and all of them welcomed him with open arms. Their family was doing much better due to the generosity of a neighbor.

Owen was 17 at the time and itching to get out on his own, much like Rep was when he was around the same age. Owen told his mom he wanted to go with Rep when he went back to Shoal Creek. After seeing what the journey had done for Rep, she thought it might help Owen grow into a man just like Rep.

Being around Shoal Creek is something both Rep and Owen have to be very careful about.

“The lives of the families of River Bluff are forever intertwined by murders with those families across the Chattahoochee River at Shoal Creek,” reads a review of “Storm Rising.” “The killing of the Hobb brothers and their daddy, and the revenge killing of Red Hogan by Star Hobb forever married the futures of these two families. Innocent people in Shoal Creek that had nothing to do with the deaths were caught up in the backwash that resulted. Everybody on both sides of the river were affected. Then the owners of the strip clubs in Phenix City where the Hobb girls were on stage, got involved with illegal whiskey at Shoal Creek. They introduced a new era of violence to both sides of the river. Lawlessness prevailed. Finally, two men, one on each side of the river, mustered their forces and fought back against the evil that threatened to consume them. As in all conflicts, both sides had losses. This war was no exception.”