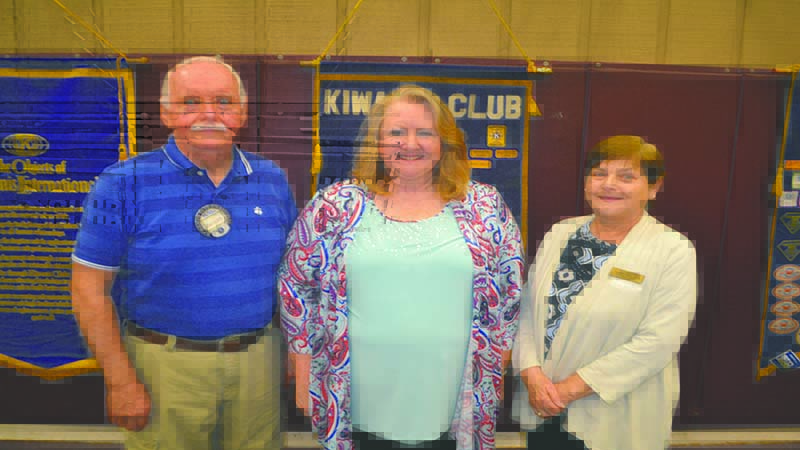 VALLEY — The state of Alabama is sometimes criticized by people from other states, but according to Chambers County Circuit Clerk Lisa Burdette, one thing the state can’t justifiably be criticized for is the way it runs elections.

“We do elections the right way,” Burdette said at Wednesday’s noon hour meeting of the Kiwanis Club of Valley.

For the club’s March meetings, Program Chairman Henry Bledsoe has had some of the county’s elected officials talk about their office and the work that goes on there every day. Last week, Paul Story talked about his duties as probate judge, and Burdette talked about the clerk’s office at this week’s meeting.

“Mail-in voting is when you are mailed a ballot, mark it and return it in the mail,” she said. “In Alabama, to vote absentee you have to ask in advance to do it, and you have to have a reason to do it.”

Those reasons could involve a work conflict, a physical disability, military service, attending college out of county, being a caregiver of someone who is homebound and so on. In 2020, people could vote absentee if they did not want to risk getting COVID-19 by standing in line on election day. In some cases, people who are incarcerated can vote.

“If you are not being held for a crime of moral turpitude, you can vote if you have a government-issued ID,” Burdette said.

Burdette said there are very few instances of inmates voting in Chambers County but that it is more common in the state’s metro areas.

A total of 3,017 absentee ballots were issued for the 2020 Presidential election, and all but 85 of them were returned.

Approximately 60 absentee ballots were not counted. This was because the instructions included with the ballot were not properly followed.

“I want everyone who is legally registered to have their vote counted,” Burdette said. “It broke my heart not to count some of them. In most cases, it was because they didn’t have a witness sign for them.”

Those who have asked to vote absentee receive a ballot with a list of instructions how to vote. The instructions are easy to follow but must be followed to have their vote counted. The only time their ballot is visible to someone at the polling place is when it is taken out of the brown envelope it is placed in and fed into the vote-counting machine.

“It is so important to follow the instructions you are given, but some people don’t,” Burdette said. “This past year’s election was like something I’d never seen before. It dominated everything we did for two weeks leading up to it. We had as many as 300 people a week coming in to vote. Our office was not set up for that.”

Burdette said that some level of voter fraud will take place no matter how secure an election is. She is confident it is extremely rare in Chambers County.

The circuit clerk’s office was the only office in the county courthouse that remained open throughout the Covid-19 shutdown. There was some juggling of the staff, having some employees working part of the day and others working the other portion.

“We have to be accessible for anyone who wants to file a case,” Burdette said. “We worked every day from the middle of March until May.”

There was a major benefit in being the only office open.

“It was so quiet,” she said. “We could work very well under those conditions.”

There’s a good bit of catching up to do because of Covid. There hasn’t been a grand jury since February 2020. Over 700 cases have been carried over on the docket and are pending trials. A total of 263 indictments have been returned so far this year. They have been added to what was held over from last year.

“It will be interesting to see how this will be handled,” Burdette said.

It will likely be difficult to select juries.

“Some people are likely to be reluctant to be in groups, given what we have gone through with Covid,” she said.

One change that’s expected is that there won’t be many spectators at the trials.

“We won’t let anyone in but the defendants,” Burdette said. “This means no family members.”

One problem counties are dealing with right now involves overcrowded jails. The Department of Corrections is supposed to take inmates who have been found guilty of felonies. Because the state prisons are overcrowded, they are allowing them to stay in county jails. This leads to further overcrowding.

Burdette said that she has enjoyed serving as the circuit clerk and appreciates the hard work being done by her staff.