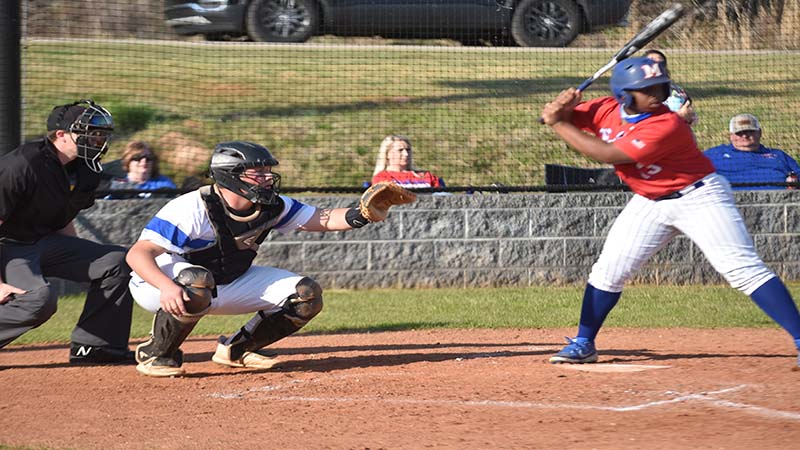 To start the season, the Chambers Academy baseball team was dominating the season, running through five of its first six games, winning by an average of 10 runs a game.

The Rebels went to Selma for a tournament hosted by Morgan Academy, and for the games in the tournament and the first area game of the year, the Rebels’ bats were quiet, scoring just six runs in the three games and losing all three.

The Rebels ended their losing streak with a bounceback win against Lakeside and haven’t looked back since, scoring 43 runs in their three-game winning streak.

“We have a really good chance to get a little streak going. That’s one of our goals is to get a streak going and continue that streak. We’re playing really well right now.”

With the winning streak, the Rebels have jumped into the latest Alabama Sports Writers Association rankings, taking over the No. 10 spot. Though he likes the recognition, NesSmith still has his focus on winning an area championship.

“It matters, but it’s not the most important thing,” NesSmith said. “We don’t talk about it much. Our goal is to win the area, and we’re going to have our hands full. We have to beat Macon-East twice at their place.”

The area comes down to Macon-East and Chambers. Macon-East won the first matchup, winning 10-3 at Chambers. Since they swept Lakeside, Chambers is firmly in the playoffs, at worst the No. 2 seed in the area, which would give the Rebels the home-field advantage in the first round. The area will be decided on April 6, when Chambers travels to Macon-East.

One key player in the Rebels’ success has been senior catcher Jacob Oliver, who has been the team’s vocal leader and one of their main producers.

“He’s taken on that leadership role and he’s playing better than he’s ever played. He’s taken that extra step this year,” NesSmith said. “I told him at the beginning of the year that this is his team, and he’s really embraced that this year. I’m excited for him because it couldn’t happen to a better kid.”

“It’s fun and it’s good preparation for the playoffs,” NesSmith said. “It’s a true three-game series. In years past, we’ve seen each other’s No. 1 twice, and it’s not going to be like that this year. It’s a huge series. [Springwood head coach] David [Stirckland] is a great guy and he does it the right way. The kids look forward to it, they talk about it all year. Coach [Jason] Allen has dubbed it the battle of Highway 50. We’ve been blessed enough to be on the fortunate end the past few years.”

Senior Payton Allen will start for the Rebels. First pitch is scheduled for 4:30 p.m. EST.