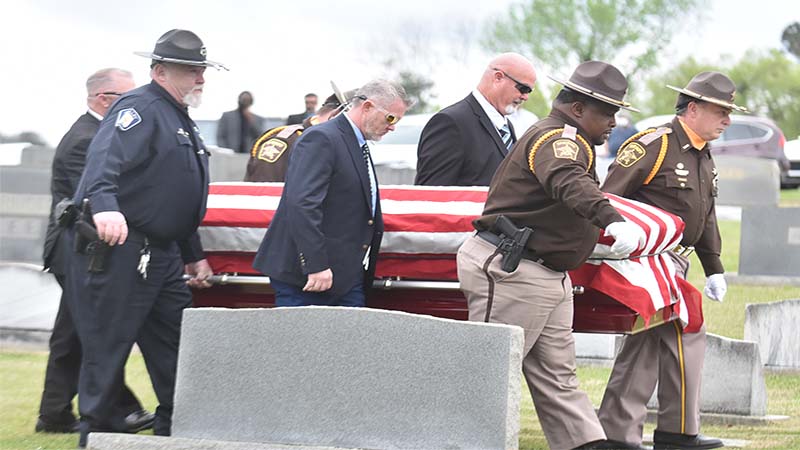 Capt. Jason Fuller of the Chambers County Sheriff’s Office was laid to rest Tuesday afternoon in Marseilles Cemetery.  Funeral services were held inside the Valley Community Center before a procession that included approximately 40 law enforcement vehicles led everyone to the graveside service.

Fuller was only 47 years old when he died last Friday. He had been a law enforcement officer since 2001.

Pastor Darren White of Emmanuel Baptist Temple and Evangelist Ronnie Trenton, who has ties to Emmanuel, spoke at the 2 p.m. service at the community center. Kristin Nelson did some touching solos of “Jealous of the Angels” and “It is Well With My Soul.”

“Jason loved the Chambers County Sheriff’s Office and serving with his fellow law enforcement officers,” White said. “He was a caring person, always willing to help anyone who needed help.”

White encouraged those who loved Jason to think of the words of Jesus when he was about to be separated from the Disciples just before his crucifixion.

“Let not your heart be troubled,” White quoted scripture. “If you believe in God, believe also in me.”

White went on to say that Jesus is the way, the truth and the light.

“Jason is not laying in this casket,” he said. “He has gone on to be with the Lord in heaven.”

He added that Jason had been fortunate to have found Christ at a young age.

“His dad (Ray Fuller) told me that Jason came home from school one day and told him that he had given his heart to Jesus,” White said. “He was of elementary school age at the time and attending Oakside Christian School in LaGrange.”

Trenton said that God knows what everyone’s needs are.

“He can do wonderful things for you if you put your trust in him,” he said. “Those who walk with him and praise him will be blessed.”

Area law enforcement officers had a most impressive presence at the funeral service and at graveside. Officers from the Chambers County Sheriff’s Office, local police departments, the Lee County Sheriff’s Office and Alabama State Troopers were in dress uniforms, some of them with gold braids on their shoulders and wearing white gloves. Draped with a U.S. flag, the casket was at the far west end of the Community Room. Large numbers of carnations and other fresh flowers bedecked both sides of a speaker’s platform behind the casket.

At the end of the service, a funeral procession then took the slow ride to Marseilles Cemetery in West Point. As the procession went along Sportsplex Drive, it passed under a huge U.S. flag flown from the ladder of an East Alabama fire truck. A similar sight awaited in West Point courtesy of the West Point Fire Department.

As the honor guard carried the casket to the final resting place in the cemetery, a group of approximately 50 uniformed police officers, firefighters and paramedics stood at attention and saluted.

With the family close by underneath a tent, White encouraged them to think of Jason being more alive than ever. He referred to an often quoted statement from famed evangelist Dwight L. Moody: “Don’t believe it if you ever read in the newspaper that I am dead,” the quote goes. “I am more alive than I have ever been because I am in heaven with the Lord.”

“It’s comforting to know what will happen once this life has ended,” White said. “Those who have gone on to heaven have new bodies and do not feel pain.”

The graveside service ended with a 21-gun salute performed by officers from Lee County Sheriff’s Department and taps being played on trumpet by Valley Police Chief Tommy Weldon.

Two officers folded the flag and gave it to Chambers County Sheriff Sid Lockhart, who knelt next to Jason’s parents and said some comforting words as he presented it to them.

Jason was laid to rest in the Fuller family plot. Nearby is the grave of his grandfather, Prince Fuller, who was only 31 years old when he died in 1944.