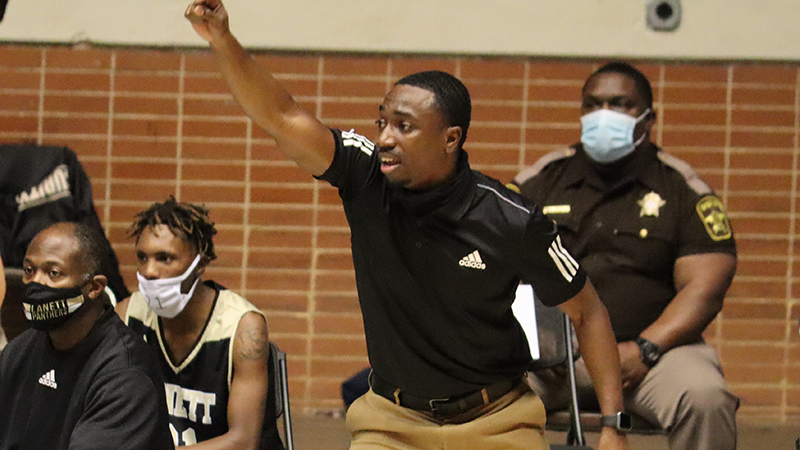 Since he was in college, Trentavious “Tay” McCants has been working as a coach.

McCants, who played basketball at the University of North Alabama, helped his father coach an AAU team in Georgia during the summer. After getting a taste of coaching, McCants was hooked. After graduating, he reached out to Lanett JV head coach Terrance Price to see if he could help coach the team, and Price agreed.

McCants stayed only one year with the JV team, as then-head coach Richard Carter added McCants to his staff. Three championship wins and another championship appearance later, McCants was named Carter’s replacement in May of 2020.

McCants was on Carter’s coaching staff for five years. In those years, McCants worked extremely closely with Carter. They broke down film together, put together scouting reports and bounced ideas for plays and defenses off one another.

Because of that work and that drive that McCants had for coaching, Carter gave McCants several chances to learn on the job in key situations.

“Coach Carter gave me a lot of room to grow. He always put me in tough situations when the game was on the line, and he gave me the opportunity to make a couple of game-winning decisions,” McCants said.

McCants recalled a game in Handley during the 2017-18 season. The Panthers trailed by two when Carter called a timeout. Carter turned to McCants and asked if he “wanted to go for the win or go for a tie?”

“I told him I wanted to win it, so he gave me the clipboard and said draw it up,” McCants said. “I just thank coach Carter for putting me in situations like that, giving me a chance to grow and showcase my coaching skills.”

Lanett won the game when senior Terrion Truitt hit a 3-point shot in the corner.

When he retired, Carter’s plan was to stick around the Lanett program and enjoy watching his former team. Due to COVID-19, Carter was not able to go to a game this season. Instead, he watched the team’s playoff games once the AHSAA started broadcasting the games on their networks.

“That was a thrill for me because I got to see those kids play,” Carter said. “I just wanted to see their growth because I had the opportunity to coach some of those kids last year.

The 49-year head coach pointed out two things he saw constantly from his former assistant — the Panthers played with a lot of energy and the defense was different than in years past.

“I really love the energy they play with. They really get after your rear end,” Carter said. “That’s what I like. I like the fact they play with a lot of energy. They get up and down the floor really well. I love the energy on defense because they’re always scratching and clawing, and they are all rebounding.”

Throughout the season, McCants’s main point to his team, especially coming out of halftime, has been to play with a lot of energy. He said that point of emphasis came from his time on Carter’s staff.

“I was the energy guy for him a lot,” McCants said. “He had gotten a little older, so I just tried to bring a lot of energy. It worked back then, so I just tried to keep it going while I have a little bit of gas in the tank. I know as I get older, I’m going to slow down, but while I have it right now, I’m going to keep running until I get on empty. I think my guys feed off my energy. I fuss at them in practice, and I encourage them in the game. That’s why they’re able to play freely.

“Whenever I show a lot of energy and excitement, and they see me do that in practice and during the game, they just turn up and take it to another level.”

McCants said he changed the defense to fit his team.

“In the past, we had deep, deep teams, but right now, we have a lot of kicks and injuries. That’s why I wanted to teach them a lot of different zone presses because I knew we were going to have to pull them out one day,” McCants said. “I just feel like my bigs don’t get as winded but make sure they’re playing defense at the same time.”

McCants and the Panthers have a chance to win their fourth state championship in six years on Saturday against powerhouse Midfield, who narrowly defeated Calhoun in the semifinal game on Wednesday.

“I think it will be an all-out war,” Carter said. “I say that because Lanett has the two big bangers on the inside. They’re guys that can run the floor, and I think that’s going to cause Midfield some problems. Midfield has more than just [Calhoun five-star prospect] JD [Davidson] that they can throw at them. I think it’s going to be a good game. It’s going to be high-intensity, pressure basketball, with Lanett coming out on top.”