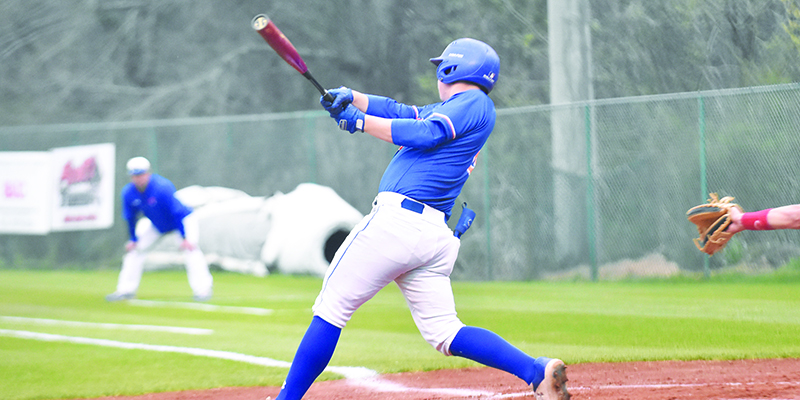 At the time, only two players were hitting over .200.

Since the rough start, Valley has rebounded, winning five of its last seven games, including a series sweep against area opponent Eufaula.

One of the big reasons for the Rams’ recent success is freshman CJ Chambley and the spark he has provided to the lineup.

“The kid is a good hitter,” head coach Patrick Shivers said. “He didn’t get to play last year, from being ineligible, so we were very eager and he was very eager to get out here and show everybody that he’s a quality player, and he is. The guy can swing the stick. He has good bat control, and good balance at the plate. He’s an aggressive guy, but he finds a way to find the barrel of his bat. Any time as a hitter you can find the barrel of your bat and hit the ball hard, you’re going to be successful. He’s not really a surprise. I think he’s a very capable hitter and I’m glad to have them and looking forward to spending the next couple of years with him.”

Through the first 14 games, Chambley leads the Rams in hits, home runs, batting average and RBIs.

“I’m not going to say that I expected him to lead us in home runs and RBIs. As a freshman, I knew he would be one of our top four or five hitters,” Shivers said. “The pop at the plate against Eufaula, that was pretty neat to see. He’s seeing the ball very well and he’s barreling the ball up. It just so happens that he has runners on when he is up to bat. It’s falling for him right now, and I hope it continues.”

In his past four games, Chambley is hitting .625 (10-of-16) with 11 RBIs. Six of the 11 RBIs came in the second game against Eufaula when the freshman sent two balls over the fence for his first career multi-home run game.

“It was a good experience,” Chambley said. “I wasn’t trying to go up there and do that. I just got lucky.”

To start the season, Chambley was hitting in the five-hole in the lineup. Most of the time, he wasn’t batting with runners on base or in scoring position. He jumped up to the No. 3 hitter in the lineup when Valley traveled to Beulah on March 12 and has solidified his role since.

“I just keep working to keep getting better,” Chambley said. “I’ve always known I can swing it. I started out a little slow, but I kept working and everything started to fall in place. I got sat out last year, so it pushed me a little harder. I started to see the ball a lot better.”

Along with providing a hot bat in the lineup, Chambley has been used in several spots in the Rams’ infield this year, starting at first base, shortstop, third base, second base and pitcher.

“It’s huge. He’s limited right now with his arm, he has a strain right now, so we’re trying to play him on the right side of the infield,” Shivers said. “Normally, he can play first, second, third and he pitches some for us. It’s huge any time you have a guy that can play multiple positions on the infield. It frees up substitutes and allows you to do different things defensively.”

Valley is off for the remainder of spring break but will open up against area opponent Russell County in its first game back from the break. If Valley wins the first game on Tuesday, it would move to 3-0 in area play, setting it up for a strong shot to make the playoffs.

“It started out a little slow, but we all love each other,” Chambley said. “We’re all going to play for each other. We’ve all gotten closer. We started out slow, but we came together and knew that we had to work a little bit extra hard to get going. It’s been a good experience. They push me every day and we push each other and we’re getting better.”