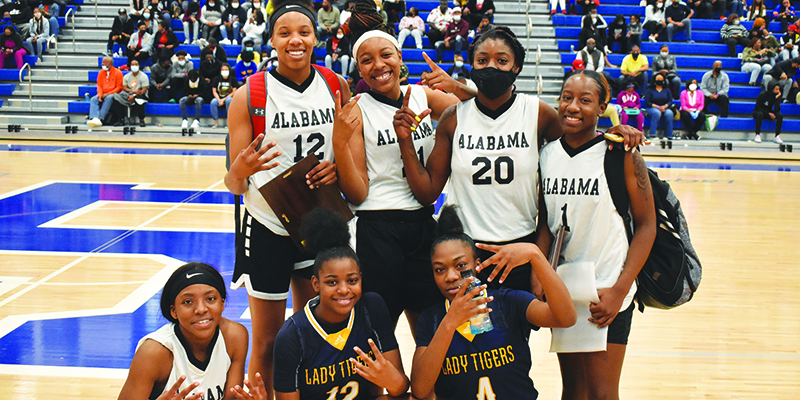 On Friday, some of the best basketball players from southeast Alabama and southwest Georgia met at LaGrange High School for an Alabama/Georgia All-star game. Chambers County was represented by LaFayette’s Feliah Greer and Lanett’s Alyse Madden.

“It was fun. It was really just a fun game,” Greer said.

While both were standouts during their high school careers, both players found out through Snapchat that they were going to be playing on Friday.

“To be honest, I really didn’t even know about it, until I saw my name on someone’s Snapchat,” Greer said. “My coach [Fred Bridges] told me when he found out. I really just found out about it.”

While Greer and Madden played against each other throughout their high school careers in one of the biggest rivalries in Chambers County, Friday wasn’t the first time they have played together, as they grew up together and played travel ball together.

“It felt good to me because this girl is like my sister,” Madden said of getting to play with Greer one last time. “I love her to death. Everyone tried to draw us apart because of the rivalry, but we really don’t care about all that.”

Greer’s final high school game was against Madden in Montgomery in the 2A Regional Championship Game. Madden and the Panthers won that game 53-47. Madden’s final game was a week later in the 2A semifinal game against Hatton, so Friday was the final time either would play high school basketball.

“For me, it’s heartwarming because I don’t have any offers or anything like that,” Madden said. “That could be my last game, I don’t know yet.

Greer has a chance to play at the next level.

Really for the first time in their high school careers, Friday’s all-star game was the first time Geer or Madden played virtually the entire game, something that drove them crazy.

“I haven’t ever just sat on the bench,” Greer said. “I’ve never been cold. I’m not used to not being in the game. I got to do something new today, which was cheer my teammates on. It got me ready for college because I know that I’m not going to be playing the entire game. I have to get used to that.”

Both girls thanked their individual coaches for helping them to this point in their high school careers. Greer spent two years with LaFayette head coach Fred Bridges, while Glaze spent her whole career with Lanett head coach Charlie Williams.

“Despite all the outside rumors and all the negatively, me and my coach [Charlie Williams] really love each other,” Madden said. “I really love him, because I wouldn’t be anything without that man. At the end of the day, I really appreciate him. I wouldn’t have had any shorts if it weren’t for him. I didn’t have any black shorts to play in and he went and bought me some and got them to me on time.”