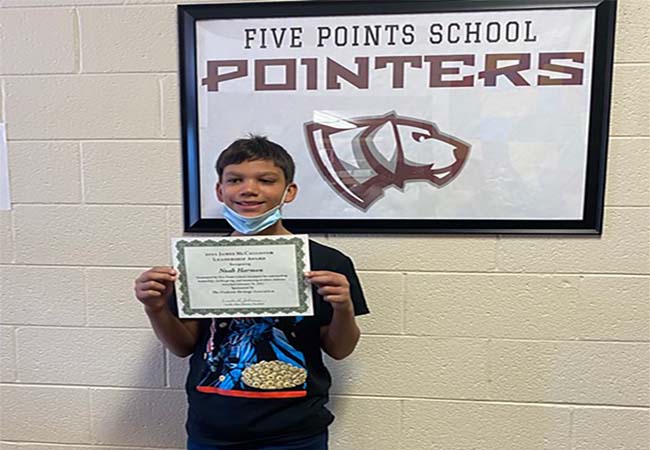 FREDONIA — Five Points School student Noah Harmon is the recipient of a new award from the Fredonia Heritage Association.

The James McCallister Award was given this year to recognize a Five Points student for consistently displaying an attitude of outstanding leadership, joyful giving and mentoring other students. Nominations for the honor were open to grades six through eight and came from fellow students. Of the 18 students nominated by their peers, Noah got the most votes.

The award carries with it a certificate and $100.

“The purpose of the award,” said Fredonia Heritage Board Member Jim Allen, “is to encourage students to recognize and to strive to develop within themselves qualities that contribute to personal success as well as benefiting their classmates, family and community. Naming the award for Mr. McCallister also enables us to recognize a recently-departed member of the Fredonia community. James was a generous and jovial man. You could count on him to be the first to volunteer his time, talents and money to make Fredonia community events successful. If you ever shook hands with him, you came away with a peppermint in your palm.”

Allen added that he was pleased to see that as many as 18 students were nominated for the award.

“It’s good that the Five Points students recognized these outstanding qualities in so many of their fellow students,” he said.