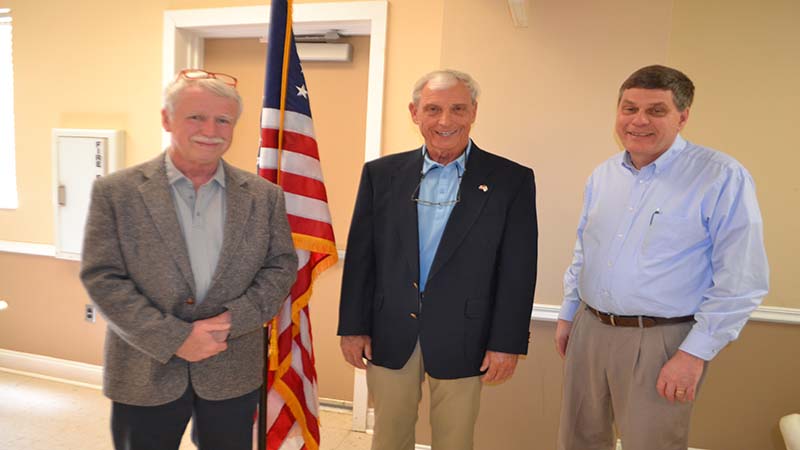 Retired two-star general Johnny White (at center) was the guest speaker at Thursday’s noon-hour meeting of the West Point Rotary Club. It was the club’s first meeting of 2021. At left is Gus Darden, the program chairman, and at right, Rob Huling, the club president.

LANETT — Retired two-star general Johnny White was the guest speaker at the West Point Rotary Club’s first program for 2021. It took place during the noon hour on Thursday at the Jane Farrar Event Center in downtown Lanett. The club did not meet in January and February due to COVID-19.

White is a native of the Shawmut community and a 1972 graduate of Valley High. He acquired a love for flying in his youth and earned a pilot’s license at age 17. The experience of flying a plane has been a lifelong passion for him, and it’s something he shares with his children. There are lots of fathers and sons who have flown the F-16 fighter jet, but White is the first proud dad to have his daughter fly that same plane. Emily White Tucker has flown them over Jordan-Hare Stadium before the kickoff of an Auburn football game. Her husband makes for a trio from the same family who have flown the F-16.

White was introduced as the speaker by his long-time friend, Gus Darden, who noted that White married his high school sweetheart, Robin Underwood, and that the couple has two grown daughters, Emily and Amy, and five grandchildren with another on the way.

“Gus is the Dr. Fauci of our golf game,” White joked. “He doesn’t look the part, but he knows all the rules.”

After graduating from VHS, White went on to earn a degree from Auburn University before joining the U.S. Air Force. He credits one of his high school counselors, Ms. Thompson, on having a big impact on his career.

“She handed me a brochure on scholarships that were available through ROTC,” he said. “I must have worn that brochure out looking at it so much. I knew then that I wanted a career in the Air Force, and ROTC helped me get there.”

White said that many people over the years have shaken his hand and thanked him for his military service. He said he always appreciates that, but they’re thanking the wrong people. “Military service allowed me to do what I love,” he said. “It’s the spouses and family members who should be thanked. They are the ones who had birthdays and holidays when dad wasn’t around. They made the real sacrifices.”

White said there are three stages of the Air Force: (1) those on active duty, (2) the service members and (3) state units such as the Alabama Air National Guard.

White accumulated over 1,000 hours of flying F-16s before becoming a commercial pilot and amassing over 30,000 hours in flying for Delta. In the Air National Guard, he became a wing commander and worked at state headquarters. One day, former Alabama Gov. Bob Riley called him for a promotion when he and his wife were at Orange Beach. When he made it to Montgomery to meet the governor, Riley told him he hated to bring him in from Florida.

“I had to tell him that Orange Beach was in Alabama,” White said with a laugh, “but Bob Riley was a good governor and a very good man.”

White had his 15 minutes to fame during the aftermath of Hurricane Katrina in 2005. He was with a group of military officials when President George W. Bush came to visit with them.

“He was a real likable guy,” he said. “I shook hands and talked to him.”

At the time, Katrina had devastated the Mississippi coast and New Orleans, and Hurricane Rita was barreling in off the Gulf. White had been appointed by a four-star general to be responsible for rescue and recovery when Rita came ashore. When asked by a reporter on live TV what should be done to accomplish this, White remarked “We don’t need the same kind of train wreck we had after Katrina.”

His wife saw it live on one of the cable channels while visiting friends at a wedding in Nashville, Tennessee. For some time after that, White’s friends in the Air National Guard had a nickname for him: “Train Wreck.”

White said it was difficult to describe the thrill of flying a plane like the F-16. Each plane costs approximately $35 million, and it costs around $8 million to train a pilot. It’s rare among fighter planes in that it can both drop bombs and fire missiles at enemy planes. It’s a Mach-2 plane, meaning it flies at twice the speed of sound.

“It’s like being a kid in the back seat of a car heading down the interstate and sticking your hand out the window,” he said.

The plane itself can withstand 9 G’s, but the pilot doesn’t need to deal with more than six of them.

White said that he’s frequently asked if he has ever been shot at in military combat or if he has ever bailed out. He said he’s thankful he never had to bail out but that he was shot at many times while enforcing no-fly zones over Iraq prior to the Second Gulf War.

“The first time I was shot at I didn’t know what it was,” he said. “I could see something coming at us leaving a contrail.”

He took some evasive action, and a missile blew up about 1,000 feet over them.

“It was an epiphany moment for me,” he said. “I could see what all that training was about.”

A member of the club asked White if it was dangerous what skilled pilots like the Thunderbirds or the Blue Angels do when they fly in extremely close formation, only a few feet apart. White says it takes pilots who are extremely gifted and who have extensive experience. The key is that every pilot in formation does what the leader does. When he makes a turn, they all turn with him.

White said he was looking forward to the new generation of fighter planes, the F-35. It’s extremely advanced and will cost around $110 million per plane. Known as the Lockheed Martin Lightning II, the F-35 is a single-seat, all-weather stealth multi-role combat aircraft that can perform air superiority and strike missions. It will also be able to provide electronic warfare and intelligence surveillance and reconnaissance capabilities.

Originally developed by General Dynamics, the F-16 Fighting Falcon was originally a day fighter but evolved into an all-weather plane.

“I’m asked all the time why Alabama has F-16s and why the governor is in charge of them,” White said. “If there’s ever some kind of crisis in need of immediate action, it’s a way to respond. It might be needed to support traditional guard units.”

White said that such a response was needed when a levee collapsed near the town of Elba in 1990. Homes were inundated and the downtown streets were flooded. Six people drowned, and over 1,000 people had to be evacuated.