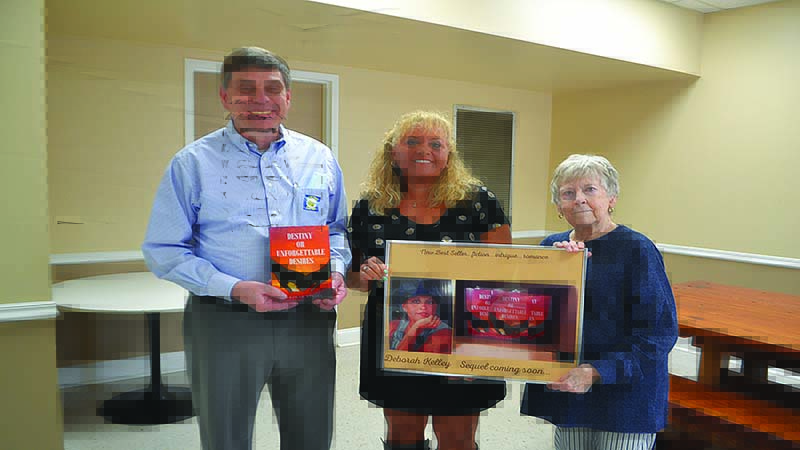 LANETT — A long-time member of the West Point Rotary Club returned for Thursday’s weekly meeting after an extended absence, partly due to work responsibilities and partly due to covid. Debbie Kelley, a past president of the club, talked about a best-selling book she has written. It’s under the name Deborah Kelley and is entitled “Destiny or Unforgettable Desires.”

It has been published by an Indiana company, XLibris, and is already popular enough to have Kelley booked on a book store tour.

“The book has really taken off, and I am really excited about it,” she told members of the Rotary Club. “I will be doing book signings over the next several weeks in places like Pensacola, Orange Beach, Natchez, Mississippi and Dade City, Florida.”

She will be autographing books in Louisiana in May.

“I have always wanted to be a writer, but never expected this kind of reception so fast,” she said.

The book has gotten numerous five-star reviews. “I read this book in one sitting,” said one reviewer. “I bought one for my girlfriend on Valentine’s Day. She’s looking for the movie!’ “I really enjoyed this book, and can’t wait for the sequel,” reads another review. “Gotta admit the ladies will love it!”

Seldom is there such enthusiasm about a book that’s been out there for less than three months.

The book’s main characters, Destiny and Andrew, meet under a breezeway at a hotel. They didn’t know each other but had an instant attraction to each other, something that leads to some passionate encounters.

The book leaves you wondering whose perspective it is being told from, Destiny’s or Andrew’s.

“One of them is attached, and the other one’s not,” Kelley said. “They have some struggles to overcome.”

Kelley has a sequel planned for release this fall. She has another book that’s been released that has some storylines remindful of Chambers County. It’s called “Murder, Southern Style” and revolves around unsolved murders in a Deep South setting.

“Being here all my life gave me all the research I needed for a book,” Kelley said. “They are already talking to me about having a series.”

“If that’s done, I may have to move away from here,” she said to some laughter.

The Destiny book is the major seller. It’s already on the way to 15,000 book stores all over the U.S. and the United Kingdom. There are translated versions available in India and Germany.

Kelley has a grown daughter living in Connecticut.

“I sent her a copy of the book,” she said. “Before it arrived, she bought one off Amazon.”

The daughter responded with some emojis with wide-open eyes.

“My son, Clay, doesn’t want to talk about it,” she added.

The year 2020 was difficult for all of us, and especially for Kelley. She had two surgeries unrelated to covid and had a road mishap when her truck hit a tree. She’s overcome all that and is really into being an author.

“It’s awesome for a girl from the Valley to be doing that,” she said.

Club President Rob Huling kidded her about the raciness of the book. He made the point that what’s written in the book stays in the book. He told her, “We won’t tell the deacons at your church,” getting a round of laughter.

“I had a lot of fun writing it, but I haven’t shown it to my mom yet,” she said.

FORMER PRESIDENT TURNED AUTHOR — Debbie Kelley (at center), a former president of the West Point Rotary Club, talked to the club Thursday about her new book, “Destiny and Unforgettable Desires.” It’s a big seller, and she will be doing book tours where she will be signing copies of it. A sequel to the book will be out before the end of the year. Club President Rob Huling (left) is holding a copy of the book. Kelley and Program Chair Elinor Crowder (right) are displaying a promotional poster for the new book.