Lanett athletics get back to weight training in new facility 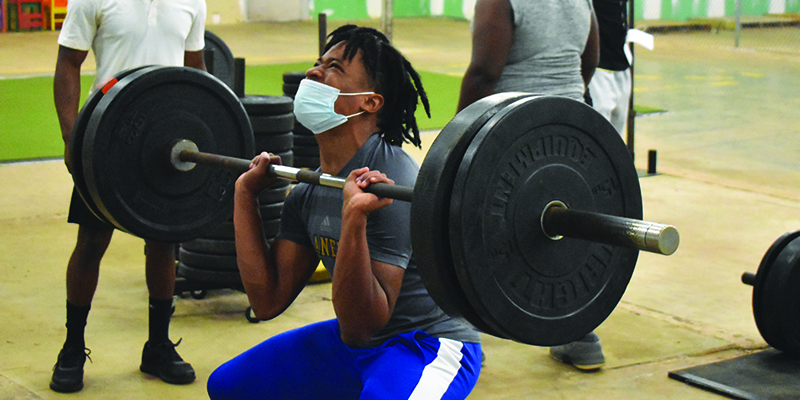 When the Lanett field house burned down on Feb. 1, athletic director and head football coach Clifford Story needed to quickly find a place that his athletic teams could work out and use. The fire ended the Panthers’ regular season in basketball, but the two teams still had a couple more home games left, as the boys’ team hosted the 2A Area 7 tournament, while the girls’ team hosted Geneva County in the regional round of the AHSAA 2A playoffs.

Since they couldn’t use their gym because of smoke damage and the utilities are out in that portion of the building, Lanett was able to use the Lanett Recreation Department’s gym.

While the basketball playoffs were going on, Story was meeting with several businesses in the community, looking for a place his athletes could use to workout during the off-season.

After checking out about five or six locations, Story settled on Valley Baptist Church’s facility on Feb. 23.

“It was extremely big because sometimes you don’t really understand how important the community is until something like this happens,” Story said. “We’ve always had a great community, but for them to pull together and to give us so many choices and options, that lets us know that this community is behind us. They’re for Panther nation. They’ve shown us that whatever we need, they’re willing to go above and beyond to make sure we get it. The good Lord blessed us with this facility. We’re thankful to Valley Baptist Church and their church family for allowing us to use this facility. It’s been great. It’s allowed me to do some things that I haven’t been able to do because of the space that we’ve had.”

The facility that the Panthers are using is much larger than what they’ve had in previous years, which allows Story and his coaching staff to get more done. The Panthers were also gifted several weight racks among other equipment from Wright’s Sporting Equipment.

“To me, I like it very much. There’s so much space, you can do whatever you want to do,” junior Bryant Story said. “Working out wise, it’s just better than the old facility. We can get fieldwork done on the turf that they put in, we have more weights than we had in our old locker room.”

With more space and weights, the Lanett coaching staff has been able to break up the players, so there are more groups getting work done at once.

Along with the high school and junior high students, the Panthers have also brought in several sixth graders, so they can build a foundation for the future, as they are working on their form and not using any weight yet.

“They’re excited,” Story said. “Our motto is going to rise from the ashes, and we’re going to use that as motivation as this year progresses. It’s really been great because the kids are eager. They were ready to get back to training. They were asking me every single day ‘coach, when?’ until we were able to get things set up. Our turnout has been great. We’ve had a little over 60 kids, and we’re having 25 sixth graders coming in. We’re doing the things that we need to do to keep this program moving forward.”