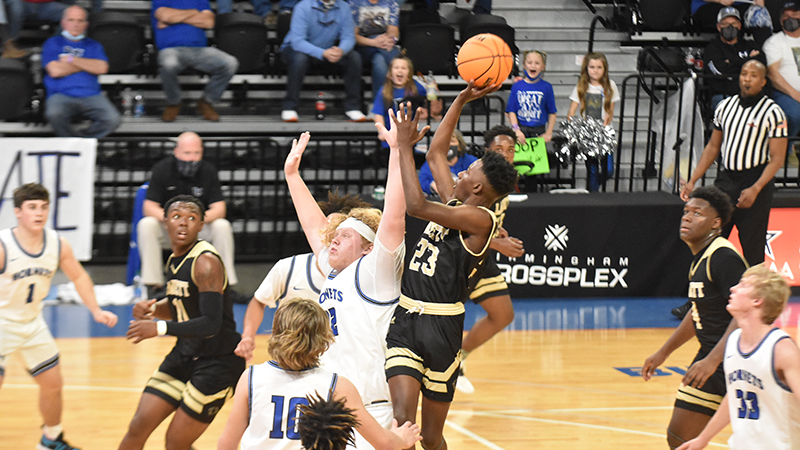 BIRMINGHAM — The Lanett boys basketball team is back in the state championship game for the second straight year.

The Panthers dominated the second and fourth quarters against Hatton on Wednesday, blowing past the Hornets 83-48 in the 2A state semifinal game.

“I’m still trying to take it in,” head coach Trentavious McCants said. “There’s so much excitement. My guys are so happy. I had to tell them to calm down and save some of that energy for Saturday. There’s just a lot of excitement going on at Lanett right now.”

The game was tight to start, as neither team was getting shots to fall. With the Panthers up two, junior Bryant Story came off the bench and provided a spark to the offense.

Story caught the ball behind the NBA range 3-point arc, and without hesitation, let a shot fly. It hit the bottom of the net, igniting the Lanett crowd and bench. Story hit another deep three in the corner later in the quarter, which put the Panthers up six.

“With Bryant, I’ve been working on his confidence and just telling him to play under control,” McCants said. “When he first came out and shot that three, I looked at my coaching staff and I wanted to take him out of the game. When it went in, I said ‘hey, we have something here.’ He came in, shot another three,  got a steal on defense. Bryant was just ready today. I thought the stage was going to be too big for him, but he showed me it wasn’t.”

In the second quarter, Lanett found a rhythm, knocking down eight of its 17 shots, and increased its lead from five to 18 by the end of the quarter.

Coming out of the halftime break, Lanett was in the same spot it was in the Southeast Regional Championship game. In that game, Lanett led by 14 points but allowed Geneva County back into the game during the third quarter.

On Wednesday, the Panthers continued to push the tempo, outscoring the Hornets by two points in the quarter.

“I just kept fusing at them about bringing their energy in the third quarter,” McCants said. “All year, when we come out of halftime, we get complacent. I was just telling them ‘the game wasn’t over yet. You have to keep fighting.’ We just wanted to make sure we won the third quarter, then the fourth quarter would be ours too.”

Alongside Lanett’s offensive execution in the second quarter, the Panthers made the Hornets one dimensional, allowing seniors Kris O’Dell and Ridge Harrison, who were the team’s leading scorers, to only find success in one half.

O’Dell had 13 points in the first half, but Harrison scored just four points. In the second half, Harrison finished with 19 points, while O’Dell scored just one.

“We just tried to wear them out,” McCants said. “We pressed them a lot. We threw every defense we had at them, just to try to get their legs heavy. They’re used to playing fast, and we wanted them to match our speed. I don’t think they could do it today. My guys came out and put pressure on them on both ends of the floor, and we were able to execute on both ends of the floor.”

“Dozier has been doing his thing all season. He didn’t score as many points as he’s been doing in the past, but he did find people in transition and get people involved on both ends of the floor,” McCants said. “He showed a lot of leadership tonight.”

Junior Markavious Atkinson finished with a double-double scoring 12 points and grabbing 11 rebounds. Story finished with 14 points off  the bench.

This season is McCants’s first as the head coach for Lanett, as he served as an assistant coach under hall of fame coach Richard Carter the past five seasons. For him to make a championship game in his first year as a head coach, McCants said the moment is big for him and his team.

“It feels great. My guys have been fighting,” McCants said. “Making it to the state championship in my first year, it means everything to me.”

Lanett is aiming to win its fourth championship in six years on Saturday when it plays either Midfield in the 2A State Championship game. The game starts at 11:30 CT.