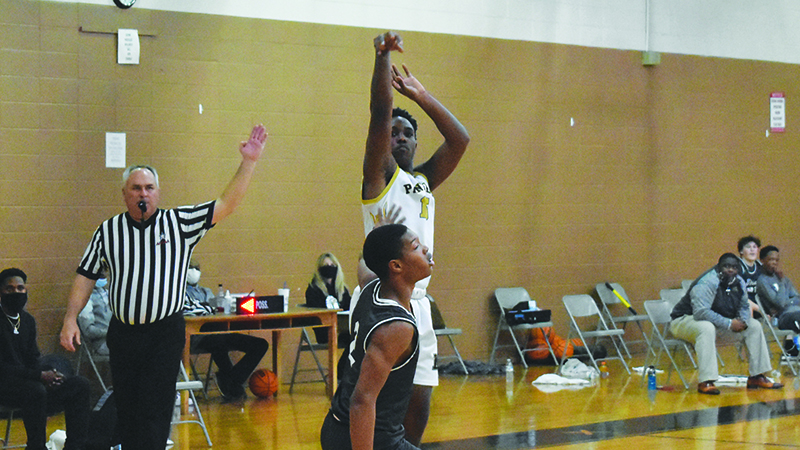 Getting to Birmingham was Lanett boys basketball head coach Trentavious McCants’s goal to start the season.

Now the next goal for McCants and the Panthers is to advance one step further, as they face Hatton in the 2A state semifinal game on Wednesday in Birmingham.

The Hornets like to play up-tempo on offense, something that fits right in with Lanett’s game plan, as it has tried to turn up the tempo on almost every team that it has played this year.

“They play together, and they play with a lot of energy,” McCants said. Every film that I watch, they’re making sure to push it in transition, they’re sharing the ball and rebounding. They’re doing all the little things that it takes to win games. Like coach Charlie [Williams] said, everyone is here for a reason. You don’t want to underestimate anyone.”

Against Geneva County in the 2A Southeastern Regional Championship game, Lanett played fast throughout the first half, building a 17-point lead. At halftime, it looked like Lanett was going to continue to push the tempo and continue its onslaught against the Bulldogs, but the Panthers struggled for most of the third quarter, taking just eight shots in the eight-minute span.

Instead of continuing the up-tempo game that was unfolding, McCants and his coaching staff made an adjustment that it hadn’t really made all year— it slowed the ball down, taking up chunks of time before finding an opening against the defense.

“It shows that we can control the game,” McCants said. “At the beginning of the game, we only knew one speed and that was fast. A lot of times when we should have been slowing the ball up, we were still playing fast. That Geneva County game showed that we can actually slow the ball down and control the game. That’s what we needed, especially in that fourth quarter.

While the Panthers have an experienced program, as this is the fifth year Lanett has reached Birmingham since 2016, only a handful of players have played in Montgomery, let alone Birmingham.

“It’s really big because at a stage like this, they bring out their leadership,” McCants said. “I know some of our younger kids and the kids that haven’t been here before, when we played Geneva County and it got to the nitty-gritty in the third quarter, their eyes got big. When I looked at the vets that had already been to Birmingham last year, it was nothing to them. For my younger guys, to see Dozier, Atkinson, Abner and Hurston take on that leadership really helped them out.”

“A lot has been put on me, Trey Abner, KK Atkinson,” Dozier added. “We know what it actually takes to get there. Having that leadership is vital and important to the team.”

“It’s a great moment for me right now. I really can’t explain the feeling,” McCants said. “I’m really just so excited for my guys because I want to send these seniors out with a state championship and set the tone for next year.”

Though it has its eyes set on a state championship berth, Lanett has to take on Hatton, who is on a five-game winning streak. The game starts on Wednesday at 11:30 a.m. CT.