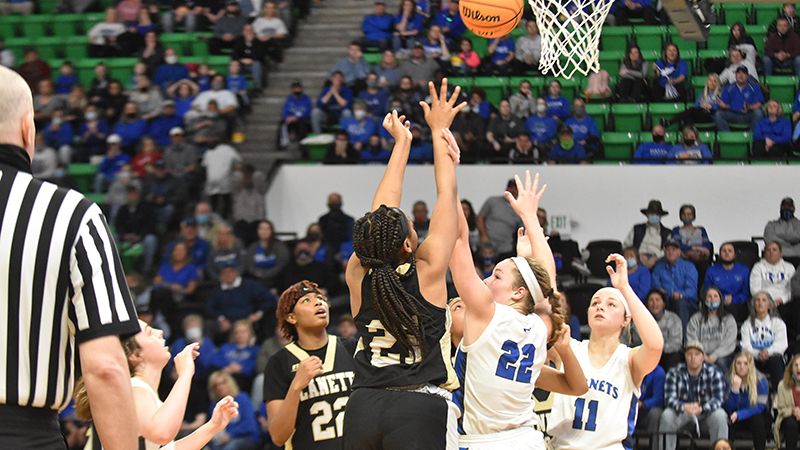 On Wednesday, the Panthers struggled at the free-throw line and missed several late-game layups that would have advanced them to the 2A state championship game. Instead, they fell to Hatton 45-38.

“I’m extremely proud. They laid a foundation for Lanett basketball, especially on the lady’s side,” Williams said. “I have a young team. I have three seniors, one junior, six sophomores, three eighth graders and a seventh grader. The future is bright. I’m ecstatic about the future. We just have to get beyond this point. We’ve been here before, but we need to get over this point.”

With 1:39 left in the game, Lanett was down five points and had Hatton on its heels as the Hornets took a timeout.

Lanett got a steal out of the timeout but failed to score on the fast break. The Panthers got two offensive rebounds but failed to convert the shots.

“Just keep shooting, eventually they’ll go in,” Williams said of his message to the team in the fourth quarter. “In girls basketball, if you make your free throws, layups and take care of the ball, you’ll win. We did one out of the three. We forced 29 turnovers and had 16. I don’t even want to talk about layups and free throws.”

On the ensuing possession, Hatton hit a pair of free throws, which effectively iced the game.

Throughout the game, Lanett’s offense struggled to get into a rhythm, shooting just 24.6 percent for the game (14-of-57). At times this season, the Panthers’ saving grace has been timely 3-point makes and clutch free throws. On Wednesday, nothing was falling, as Lanett shot just 10 percent from 3-point range and 42 percent from the charity stripe (9-of-21).

Lanett’s best offensive spurt in the game came in the second quarter.

Lanett entered the second quarter after scoring just six points in the first quarter and was down six. The Panthers proceeded to score 15 points in the period, hitting its only 3-point shot of the game while forcing seven turnovers.

“We’ve been down like this all season long and made runs,” Williams said. “I just told them to keep fighting. Good things are eventually going to happen to you when you keep fighting.”

Williams said the key to the Panthers’ offensive second quarter was the team’s leaders that kept the team focused during the rough first quarter.

“I have some great leaders on this team,” Williams said. “Ameria Zigler, Breanna Glaze and Alyse Madden, they won’t let the girls get their heads down. When you have leadership like that, it’s easier for you to just focus on the Xs and Os and let them worry about the other stuff.”

Though the Panthers ended the season one game shy of a state championship appearance, the team went further than it had in nearly a decade. The Panthers return almost all of their players next season, losing just three seniors, which was Williams’s first-class since taking over as Lanett’s head coach in the 2017-18 season.

“I just told them I love them. They’re my first class, so it was emotional for a second,” Williams said. “I think the season finally came down on them now that they’ve realized that they’re not going to practice again, I’m not going to play again, it’s my last time wearing a Lanett jersey. I just enjoyed that moment with them.”