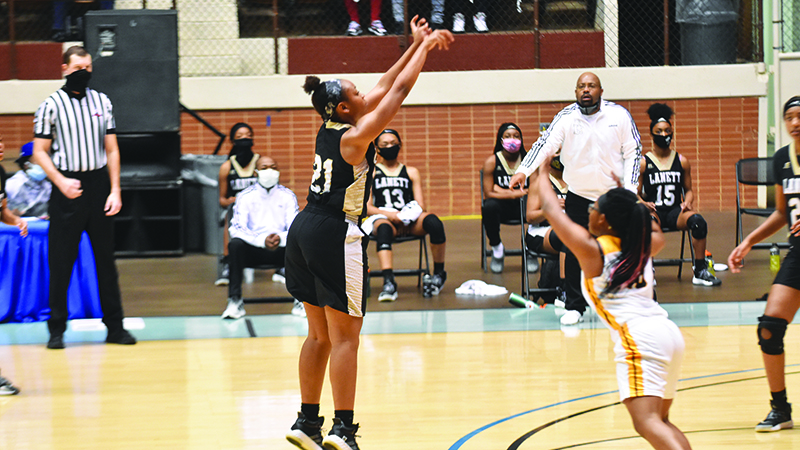 On Feb. 24, 2019, Alyse Madden was playing basketball in West Point when she was shot in the right arm. The bullet narrowly missed her main artery, which would have proven to be fatal. Now, a little more than two years later, Madden is leading the Lanett girls basketball team to the 2A semifinal game against Hatton, Lanett’s first appearance in Birmingham since the 2012 postseason.

“It’s heartwarming, especially with social media,” Madden said. “Everything that has ever been posted is coming up, like it was a year ago today or two years ago today. It really be like I’m really here. I’m really doing this. We’re really here, so we have to have it. It makes me proud because we’ve got to have it. We’re here.”

That moment in 2019 almost took everything away from Madden, let alone her basketball career, but it also gave her a better understanding of how to appreciate everything because it could be gone in an instant.

“After knowing that it was almost taken away from me, it just made me want it more and cherish it more and take it more seriously,” Madden said. “You can’t help but take stuff more seriously because it’s for a reason. Anything can happen, so I want to get what we want to get before anything goes wrong.”

Madden has always been a standout for head coach Charlie Williams. She is a natural athlete and has been playing for Williams since he took the head coaching job Madden’s freshman season. In the four years that he has coached Madden, Williams has watched his senior become a leader on and off the court.

“She was already a tremendous baseball player, but her basketball IQ has grown so much,” head coach Williams said. “Number one she plays with boys and number two is she plays hard all the time. A lot of times you might look at her on the court and you think that she’s not running fast so she’s not playing hard, but she’s playing the game in her mind. She comes to me and says ‘they’re doing this, this and this,’ or she’s thinking two or three steps ahead.”

This season Madden is averaging 11 points, nine rebounds and five assists in 18 games this season.

Thursday was Madden’s first chance to play in Montgomery after falling short the previous three seasons in the sub-regional round of the playoffs.

“I’m not even going to lie, I almost had a heart attack,” Madden said while laughing. “I all I knew was we are here now and we have to grab it and take it home, because it’s not about being scared or butterflies. If you lose that’s it. That’s all you need to know. I’m a senior, this is it for me. That’s a lot to think about, so I just tried to bundle that up and make it take it out of their heads. If I’m scared, I’m talking to them about not being scared.”

The senior didn’t allow the moment to be too big for her, as she led the Panthers to a win against LaFayette. Madden finished with 19 points and nine rebounds in the win.

She played that game just as she has every other game this season, and Williams believes Wednesday’s game against Hatton will be the same.

“I think it’ll loosen them up, because she’s going to treat this like a game in the back yard. If the ball comes off, and she can get it and take it coast-to-coast, then that’s what she’s going to do,” Williams said.