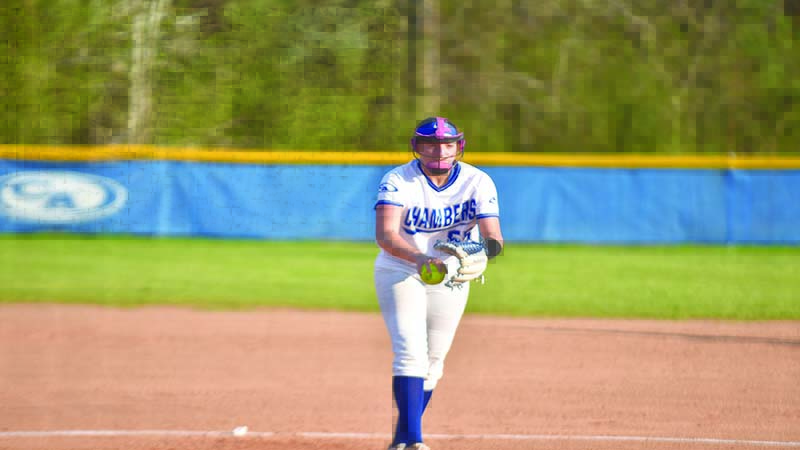 On Tuesday, Chambers Academy junior Chloe Mitcham made one of the biggest decisions of her life to this point — where she would continue her softball career. She committed to Coastal Alabama Community College.

“It’s in a very small town like LaFayette, so it’s just perfect,” Mitcham said. “The coach is really big on family. She cares about her girls, and she makes sure that they’re keeping their grades up. She’s really sweet overall.”

Mitcham, who is currently a junior, decided on Coastal Alabama because Bay Minette is a small town like LaFayette.

“I didn’t want to go to a big town because I’ve only been here,” Mitcham said. “It was easy for me to choose.”

Last season was Jon Owens first year as a Chambers Academy softball coach, though he had 22 years of experience coaching high school baseball.

Overall, he has been a coach for 26 years. He said Mitcham is one of the most competitive players that he has ever coached.

“Probably the most competitive kid I’ve ever coached was Kendall Graveman, who is with the Mariners now,” Owens said. “She has his mentality. When she gets on the mound, it’s her game, her ball and she’s going to do everything it takes to beat you. That’s what I like about her so much.”

Mitcham has been the Rebels ace the past two seasons but in the two years that she has played under Owens, she has taken big strides in the mental side of her game.

“You have to remember last year she was a tenth grader. With our relationship, she had to understand some little things like no two-out walks, what is your approach with two strikes on somebody?” Owens said. “That part is no different [pitching a softball] or [pitching a baseball]. Her mental approach to pitching has been much better this year than it was last year because she’s had to learn some things.”

Mitcham said letting her defense make plays behind her also was a step took this season, pitching to contact instead of trying to strike out every batter.

While Owens has taught Mitcham more about the right type of mindset on the mound, Mitcham has taught her coach more about softball pitching, as Owens has spent most of his coaching career as a baseball coach.

“That’s a huge transition when you’re in baseball, and you’ve worked with baseball pitchers versus softball pitchers,” Owens said. “The funny thing about it, I didn’t understand that as a softball pitcher, you can just go and go. I’m thinking if she pitches a game and throws 100 pitches, she has to have two or three days of rest. That’s not how it works, you go to the next game.

“She can pitch 110 pitches in a game and the next morning I’ll ask her how she feels. [She responds] ‘I’m a little sore but I’m good.’ You stick her back out there the next day, and you get the same exact thing. She’s had to teach me that.”

So far the Rebels have had an up and down season to this point, struggling in the field and at the plate for most of the latter part of the season, but Owens believes every time Mitcham, who has a 1.02 ERA so far this season, toes the rubber his team has a shot to win.

Committing as a junior was important to Mitcham so she could focus on just playing the rest of her high school career and not having to worry about where she’s going to go to school in two years.

“It was a lot less stressful when I played after I committed because it was a weight lifted off my chest that I didn’t have to worry about,” Mitcham said. “I still have to keep up and work my butt off, but I can just relax a little bit.”