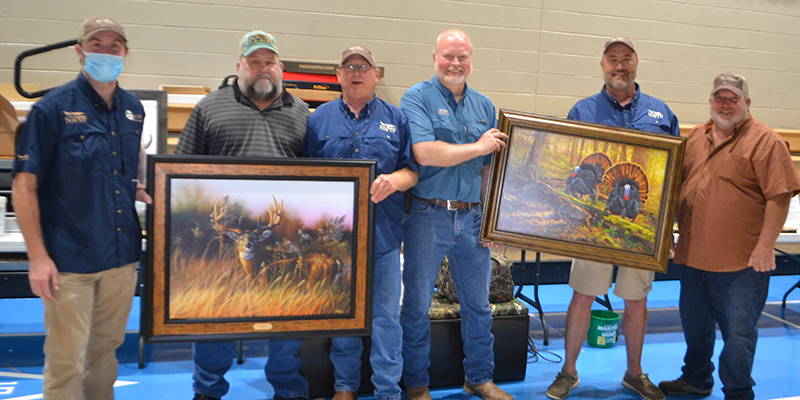 VALLEY — The Chambers County Longboards, the local chapter of the National Wild Turkey Federation (NWTF), had its 20th annual banquet Friday evening at Valley Community Center. An auction was held as a fundraiser to assist the NWTF in its goal to “Save the Habitat, Save the Hunt.”

According to Chapter President Allen Wood, the NWTF built its reputation on one of the greatest conservation success stories in U.S. history – bringing the wild turkey back from near extinction to being the plentiful game bird it is today.

Things are now much better than they once were for the wild turkey, but there are some problems that cannot be ignored.

“There are lots of predators out there, especially coyotes,” Wood said,  “and raccoons and opossums are bad to get their eggs.”

The auction items included two beautiful wildlife paintings, one depicting wild turkeys and another a trophy buck. There were also some interactive games, putting the viewer in the role of a turkey hunter stalking his prey.

The annual banquet is held during the third week of March, at the start of the traditional turkey hunting season. It goes this year in Alabama from March 20 through May 2.

The Alabama chapter of the NWTF has some ambitious goals over the next decade. They include conserving or enhancing 250,000 acres of wildlife habitat over the next 10 years, recruiting 20,000 hunters over that same span along opening 10,000 acres of hunting access in the state.

“The great outdoors isn’t just what’s on the other side of the window,” Wood said. “It’s where most of us really feel alive. Our organization is committed to making America the best it can be for both people and wildlife.”

Tyler Briggs, a member of the Chambers County Longbeards, is the regional director for the state staff. He can be contacted at tbriggs@nwtf.net or (706) 593-3639.