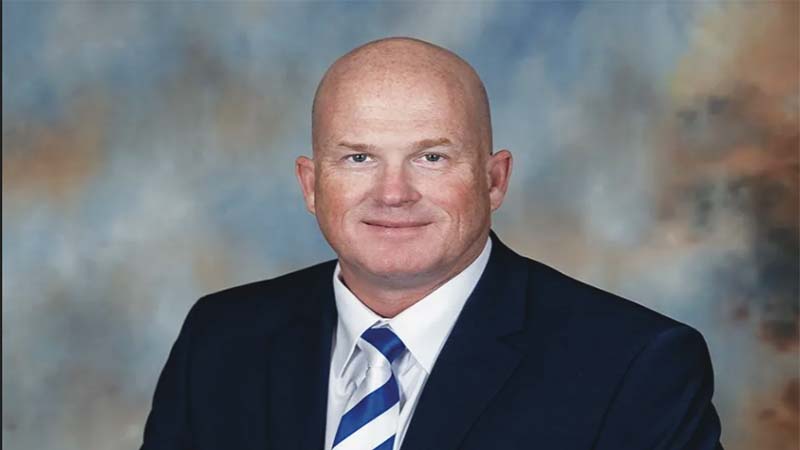 Pictured is Jon Owens, who was named the next Chambers Academy headmaster. Owens has been with the school since the start of the 2019-20 school year as the schools assistant headmaster.

When Chambers County School District Superintendent Casey Chambley announced David Owen was going to be the district’s next assistant superintendent, that left a hole at Chambers Academy, where Owen had been the headmaster for nearly three years.

“The board decided to take the interim tag off and just roll with it, which I’m just grateful for,” Owens said. “I was very surprised by that, but I’m privileged that they gave me an opportunity and the chance to grow and get better.”

Owens has been in education for the past 28 years, working mostly in public schools in Alexander City. Twenty-four of the 26 years that he was in public schools, Owens was a coach, coaching football, basketball, wrestling and baseball, teacher, teaching high school and middle school and an administrator, spending two years at Wadley where he was an assistant principal and finishing his public school tenure as a third and fourth grade principal in Alexander City.

He has been at Chambers Academy since the start of the 2019-20 school year, working as the assistant headmaster, head softball coach and teaching an eighth-grade class.

“It helps a lot because working under David, I learned a lot about the operations of a private school,” Owens said. “I was 26 years in public education. When I came back here, there was a lot to learn, and it was different in the way that you do things from a business side. Education is still education no matter where you go. It’s still about teaching and learning. These last two years, I had a lot of opportunities to learn about the business side and the parent-student relationships that we try to build here.”

As the school’s headmaster, Owens is going to stress three Cs, which are commitment, character and community.

“As far as my stamp with students, I’m a firm believer in three very important Cs — which are commitment, character and community — and that’s something that I want to see Chambers Academy do,” Owens said. “I want our students to have great character and class. I want us to be committed to excellence in everything they do, both in learning and other things. I want our students to embrace the community they live in and serve the community they live in. It’s going to be something that I highly emphasize with our students because I think those are three very important things that are part of learning and part of the education process.”

“As an administrator, you have to work hard to get out and connect with people,” Owens said. “I was really fortunate to work under a lot of great leaders. Anyone from Steve Savarese [the current AHSAA executive director], Tommy Bice [the former Alabama State Superintendent] or Lorie Carlise at Wadley, I learned a lot from great leaders. One of the things that I learned most was as an administrator and leader of a school, you have to get out and connect and reach out to people and have conversations with them, find out what is important to them and what they see are the important parts of our school. I think you have to be visible. That’s probably one of the most important keys that you do as an administrator.”

With school wrapping up in a couple of months, Owens doesn’t plan on making any changes before May’s graduation. The biggest reason for that plan is because he feels the students and teachers have excelled in a tough school year.

“We’re about 12 or 13 weeks from school ending. Right now, we’re going on as is. I haven’t made really any changes because our classrooms and teachers are doing a great job,” Owens said. “Our students are doing a great job despite a tough year with COVID. We’re going to keep the train rolling. When the school year ends, we’ll look at the way we do things and make an evaluation with my administrative team.”