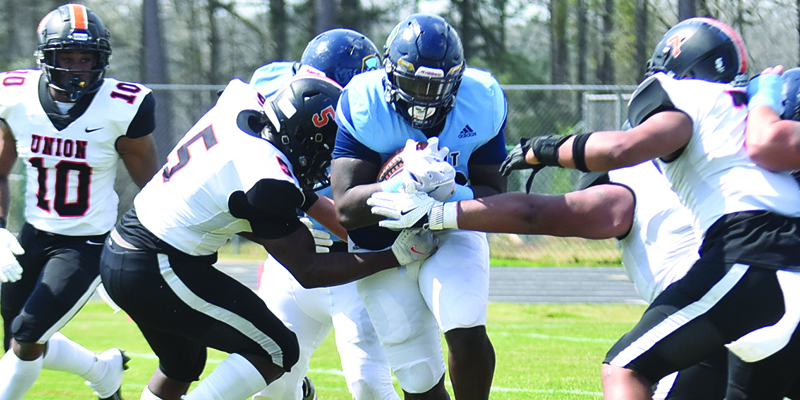 In July, there wasn’t any certainty that football would be played in the fall. Colleges set schedules, but there weren’t many that had faith a season would be played.

The Big 12 was the first conference to announce that it would play in the fall and the rest of the Power 5 and Group of 5 conferences eventually followed its lead. Though there was football played in the fall, many conferences and divisions decided to wait until the start of the spring to play their seasons.

“It was surreal because I’ve been doing this since 1989, and I played in college and high school,” Point University head football coach Julius Dixon said. “Football is a fall sport, and now they’re telling you that we’re not playing in the fall. It’s kind of like what do you mean? You start processing all of that and the reality of the situation was the fall was not going to be what we were accustomed to.”

Instead of working out during late July and early August, Dixon and his coaching staff had to quickly adjust.

One of the biggest challenges was dealing with the players’ family situations. More than 20 players had to leave the team to help their families due to problems caused by the pandemic.

“When August gets here, you start getting geared up because football is around the corner. You’re not worried about if mom or dad got laid off or if the lights are going to be on,” Dixon said. “There are just stories on top of stories that had me questioning if I’m equipped to handle this. We have guys that are dealing with issues that I consider grown issues. That was a difference for me. It was something that I had to get used to. Everyone has a story, and you’re used to hearing about setbacks. The ones that were able to make it and come back in the fall, it was day-by-day, week-by-week.”

Along with working with his players to make sure everything was OK for them in the extended offseason, Dixon had to rework the business side of the team. For example, the equipment that Dixon needed to order changed from shorts and t-shirts to sweatsuits.

“I order equipment for us doing what we need to do in August, September and October, which are shorts and t-shirts,” Dixon said. “Now, we’re practicing in January. You’re not going to need shorts and t-shirts in January, so now, I have to get sweats because the weather is going to be different … It was kind of chaotic, but you have to stay the course. When one door closes, you knock on another one. You keep knocking until you get what it is you’re looking for.”

Though there was a lot of uncertainty during the off-season, the Skyhawks were scheduled to have their first practice on Jan. 5.

While most teams in the Appalachian Athletic Conference were able to start practicing on that Tuesday, Point was on hold, due to Chambers County being rated as an extremely high-risk county by the Alabama Department of Public Health. Instead of starting on the fifth, Point held its first football practice on Jan. 19. In that two-week period, the Skyhawks were able to meet in small groups for conditioning.

“It’s taking what you can get and making the very best of it,” Dixon said.

The two weeks off wasn’t the first time that Dixon and his staff had to delay their plans due to a shutdown, as during the first semester, the Skyhawks had to take a couple of breaks due to Point shutting down programs due to the virus.

“You would think that if we had all that time to prepare, it would be great, but with the numbers being decreased like they were, and you’re not knowing week to week, a freeze could come any day,” Dixon said. “During that time period, we had two or three freezes that we couldn’t do anything with them. Once we got past that, it’s almost like starting over. We would install this, but we went over it a week ago. We don’t really know how much you retained.”

“I wake up at night when I hear the word contract tracing,” Dixon said. “One of the good things that came out of it was in the downtimes, we heavily focused on recruiting. For the first time since I’ve been here, we have about 43 guys committed.”