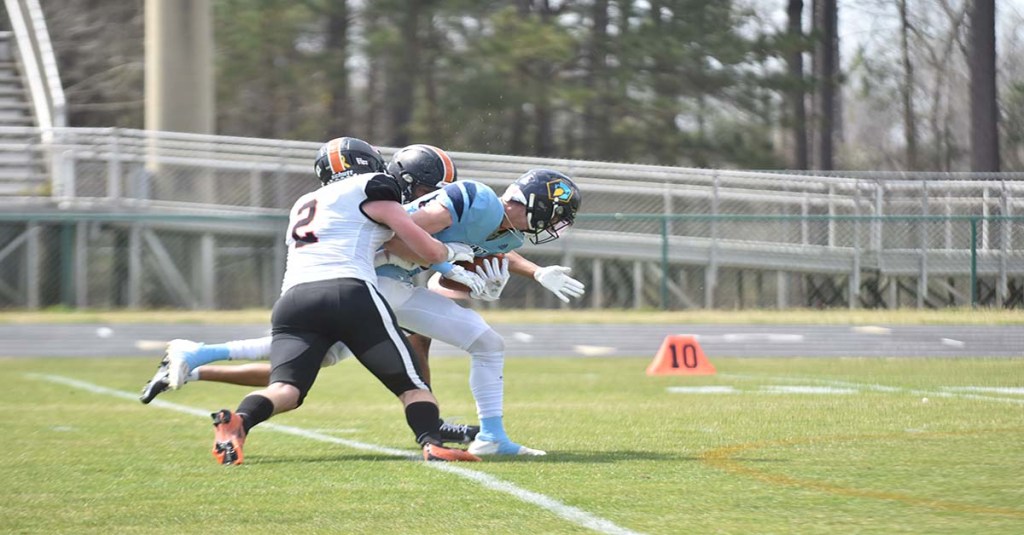 The Point University football team led Union at halftime on Saturday, but four consecutive three-and-outs to start the second half and two fourth-quarter interceptions led to a 29-20 loss.

“We didn’t make the plays, and they did,” Point Head Coach Julius Dixon said. “We didn’t make plays when we’re in position. We get them in a third-and-long, and they convert. We get the ball back, and we don’t keep it moving and score when we have an opportunity to score. It was the matter of them making plays.”

Point led 13-12 at halftime but struggled to find offensive success in the third quarter. Point ran just 12 offensive plays in the quarter, resulting in -11 yards of offense.

Though its offense couldn’t find any success, the Skyhawks’ defense kept it close.

Union ran 26 plays, netting 84 yards in the third quarter. Union managed only a field goal and that came after starting the drive following an interception thrown by Point’s Keenan Wise. The field goal gave the Bulldogs a 15-13 lead, which was never relinquished.

On Union’s second possession of the fourth quarter, the Bulldogs added to their lead. Davyon Dukes took an inside zone run 62 yards down to the Point 15-yard line, and Union scored two plays later on a four-yard run by Domonique Thomas.

Point rallied for a quick touchdown of its own, scoring in 1 minute, 5 seconds. On the touchdown, Wise hit sophomore Emory Bryant on a wide receiver screen, which Bryant took 53 yards down the left sideline for a touchdown.

Point threw back-to-back interceptions on its final two drives of the game, sealing the Union win.

With the loss, Point falls to 1-4 on the season and 1-2 in conference play.

Wise finished with 286 yards through the air, completing 20 of his 38 passes. He also had two total touchdowns, one in the air and one on the ground.

Bryant finished with a game-high 97 yards and a touchdown on just three catches. Freshman Nick Marien finished with five catches and 78 yards.

Overall, the Skyhawks finished with seven sacks and 11 tackles for a loss, resulting in negative 54 yards for the Bulldogs.

“It was really big. They had been starting [quarterback Jessie Caver], which is a dual-threat,” Dixon said. “We certainly prepared to spy him and do some things to keep him in check. This guy that started today [Jake Medders], this was his first start, so we felt that we needed to pressure him. We did, but in pressuring him, we have to be gap sound. That inside zone, inside trap play where they gashed us, we’ve got two people in the same gap. When you don’t execute what you’ve practiced all week, then you give up plays like that.”

Point remains at home for its next game, hosting Kentucky Christian University at noon on Saturday.