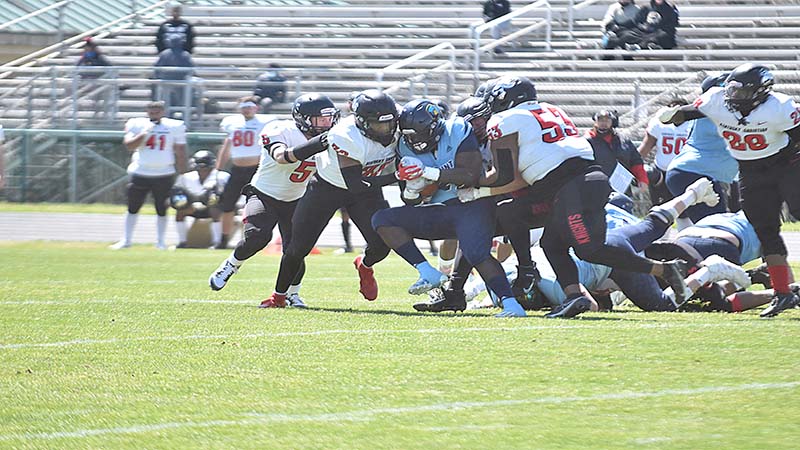 Point running back Tyrique Robinson fights for extra yards in the Skyhawks’ 28-14 loss to Kentucky Christian on Saturday.

The Knights took over at the Point 40-yard line. They scored in just five plays, capped off by a nice snag by Amari Hardwick in the corner of the end zone.

Kentucky Christian started in Point territory for its second drive, as a fumbled snap and a poor punt set the Knights up at the 43-yard line. The Knights charged ahead, running on 11 of the 14 plays on the drive, capping off the drive with a touchdown.

For the entire first half, Point’s offense struggled to get into a rhythm, running just 10 offensive plays in the opening quarter. Both of its drives finished with a punt that failed to flip the field as a bad snap and a dropped snap wreaked havoc on special teams.

Kentucky Christian scored on its first possession of the second half to take a commanding 21-point lead, scoring on a one-yard pass.

The Skyhawks finally found an answer on the ensuing drive. The Skyhawks started with the ball at their own 27-yard line but quickly flipped the field, as sophomore Brenton White hit Timmothy Gary for 19 and 30-yard receptions. Sophomore Sensir Carnes added a 22-yard run, which set up a two-yard score by Tyrique Robinson.

About five minutes later, a Point interception set up the Knights’ final score of the game, as a White pass was picked off and returned 40 yards to the Point 19-yard line. The Knights scored one play later, scoring on a 19-yard pass.

With a little less than four minutes left in the game, Point scored its final points of the game, as senior Chase Turner intercepted a Knight pass at the five-yard line and returned it 95 yards for the score.

Point threatened on the ensuing drive, as the Skyhawks recovered a Logan Flesher onside kick, but an interception at the Kentucky Christian five-yard line cut the drive short.

White finished the game with 157 yards through the air, connecting on just 17 of his 35 attempts. Robinson finished with a team-high 62 yards rushing and the one touchdown.

Point will play its final home game on Saturday against Faulkner. Kickoff is set for noon EST.