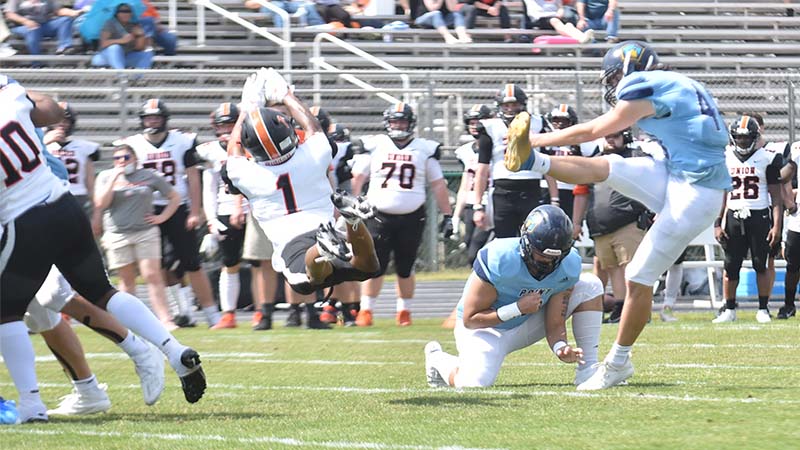 Point kicker Logan Flesher kicks a field goal. He was 2-for-2 on PAT.

After spending most of its 2021 season on the road, the Point football team returned home on Saturday but struggled to consistently make plays to win the game, losing to Union 29-20.

After rewatching the team’s performance, head coach Julius Dixon said he saw a lot of good takeaways from the loss, but the most important takeaway was players weren’t executing their roles correctly.

“I want some more consistency this week,” Dixon said. “After going back and looking at the video … We didn’t make plays and [Union] did. You can look at the stat book and say we had seven sacks or we did a lot of good things. We did some things that were not so good. Looking at that video, we had guys that were playing hard, they just weren’t playing smart.”

“We’re at a critical juncture with this team because the guys, they feel confident,” Dixon said. “They feel better than our record indicates, but what is keeping us from matching what we feel and our record is we have to do our jobs. We have guys that are trying to do more than their jobs, and that will get you beat. It’s designed for you to do your part, don’t try to do someone else’s part. We saw too much of that on the video.”

One of the Skyhawks’ biggest problems is the lack of depth on the team. Before the season, Point lost roughly 25 players due to COVID-19, as they had to go home to help their families. Along with that loss, players have sustained some injuries.

For example, sophomore kicker Logan Flesher sustained a shoulder injury in Saturday’s loss to Union that knocked him out of the game. The Skyhawks don’t have another active kicker on the team.

“If it had come down to us scoring and having to kick a field goal to win, we wouldn’t have been able to do it,” Dixon said. “With the depth being what it has been, we’re paper thin in certain positions, and that’s been a concern. When you have guys playing 65 or 70 plays when they should be [playing] 40 or 45, that’s been something that we’ve had to juggle. It might also be a veteran that is being backed up by a freshman, who still hasn’t figured it out yet. You put that freshman in and you’re hoping that he can do what he’s been coached to do.”

“My heart goes out to those guys,” Dixon said. “You want to talk about having to adjust. For three years, you’ve done it this way, and then all of a sudden, boom, everything that you’ve been used to is changed. I have 15 guys that are scheduled to graduate in May. I had seven that could have graduated in December. They chose to alter their schedule so they could come back and play in February. The goal is to graduate, and that’s all we talk about, and they all decided that they would alter their schedule, so they could come back and finish. For them to make a commitment like that, you want to send them out the right way.”

The Skyhawks will face one of their toughest challenges of the season on Saturday, when they host Kentucky Christian, who is 4-1 this season.

The Knights have averaged 33 points a game this season, including a 31-7 win against Bluefield last week. Bluefield was Point’s lone win of the season, as the Skyhawks won 28-23 two weeks ago.

Saturday’s game is at 1 p.m. EST and is the second of a three-game homestand.