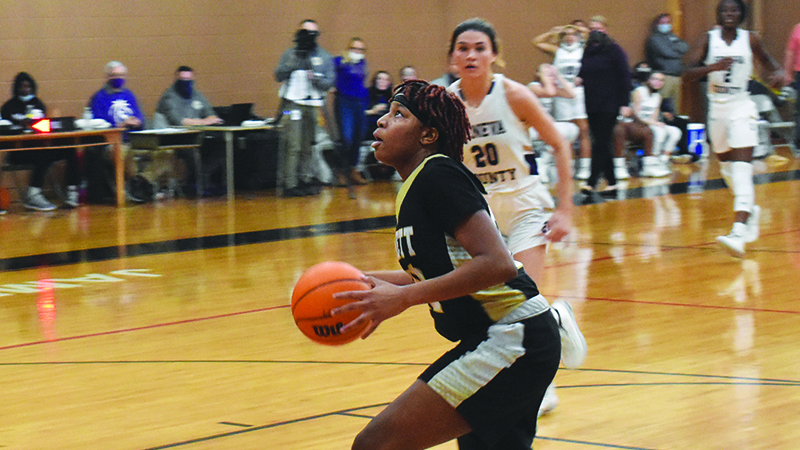 Since the Lanett boys basketball team won three consecutive state championships, the statewide focus on Lanett athletics has been on the boys’ basketball team, while the girls have been an afterthought. Throughout this season, the Lanett girls’ team has been fighting for the respect it deserves. Now, the Panthers girls team is just two wins away from winning a state championship.

“It feels like a dream come true,” senior Alyse Madden said. “When we first started, it was all about proving people wrong because people doubted us, people talked down on us, but with all the stuff that we’ve been through, losing classmates and friends, we’re doing it for a different reason now. Everything we do, any type of victory goes straight to Quae [Houston, a Lanett graduate who died suddenly in August]. It’s all for his name.”

The last time Lanett played in Birmingham was 2012. In that game, the Panthers lost to the eventual state champion Section by four. Since then, the Panthers have gotten close several times but could never get back to Birmingham.

In the past three years, the Panthers have reached the playoffs but struggled to get past the sub-regional round of the playoffs.

To start the 2020-21 season, the Panthers dealt with a lot of inconsistency early, due to not having an offseason and the fact they had to shut down for most of December because of COVID-19.

After coming back from their break, Lanett struggled to get into a rhythm, losing four of its first five games.

After losing its fourth game, the Panthers came together, coming up with the team motto ‘prove them wrong.”

The team rallied together, winning its final three games.

“It’s been up and down, it’s been sad. At times, it felt like we were all the way over with it, but we’ve been doing good. We’ve been keeping it up this year,” Madden said. “The main thing we’ve been doing that we haven’t done a lot of years is staying focused. We’ve been focused the whole entire season. We know what we want, and we knew what we wanted when the season started this year.”

Since it was the third seed in the area, Lanett traveled to Ranburne, who swept the Panthers during the regular season, and beat the Bulldogs by four points, securing a playoff spot. In the area championship, LaFayette stunned the Panthers, hitting a buzzer-beater 3-point shot.

In the sub-regional game, Lanett blew out B.B. Comer, allowing the Panthers to host Geneva County in Lanett instead of playing in Montgomery because of COVID-19.

Lanett took down the Bulldogs and their D-1 commit, setting up an area championship rematch against LaFayette.

The Panthers took down LaFayette in the regional game, sending them to Birmingham.

The regional championship game versus LaFayette was the first time any player for Lanett played in a big arena like Garrett Coliseum. Head coach Charlie Williams’ message to the team was simple — play the way that got them to Montgomery.

Lanett shot 34.5 percent in the game but hit the shots that mattered most, especially in the fourth quarter.

Now the Panthers have reached a bigger stage, Bill Harris Arena in Birmingham. On Wednesday,  they will face Hatton, who finished as the No. 4 team in 2A in the Alabama Sports Writers Association poll.

Hatton comes into Wednesday’s game 25-3 on the season and has won their last seven games by an average of 43 points.

“They’re just disciplined,” Williams said. “You get to this time of the year, you don’t see a lot of slouches. Everyone is fundamental and solid, so they’re a solid ball club.”

Though the Hornets have a lot of firepower, Williams has keyed in on Lanett playing its game and not letting Hatton’s talent influence the game